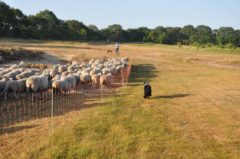 Following the extremely successful transformation of Golf Club Heelsum (formerly Golfbaan Heelsumse Veld) from a mundane and featureless 27 holes into what some critics are calling a ‘Modern Heathland Classic’, the club has contracted with Steve Marnoch, lead designer at golfmarnoch Limited for an unprecedented seven year retainer to oversee the maturation of the course. Steve Marnoch from Morayshire, Scotland is very familiar with the classic heathland course characteristics.

The initial construction works carried out over a two year period involved re-shaping of fairways, roughs and green surrounds, re-bunkering throughout in a ragged, heathland style and extensive ground preparation and then planting of typical heathland vegetation including semi-mature pines, birch, gorse and of course heather, lots and lots of heather!

The club manager, Gert Mulder, believes strongly that the works have been so successful because of the combination of skills that Steve Marnoch offers as a qualified landscape architect as well as an experienced golf course architect. 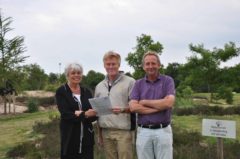 “Steve Marnoch understood the brief exactly from the outset and has worked tirelessly with us in ensuring that Golf Club Heelsum realises the dream to transform into a great heathland golf course.

“This concept has not been easy in the Netherlands as we have been introduced by Steve to construction techniques new to The Netherlands and it is his clear understanding of how to design, construct and then maintain our new course features which is fundamental to our success story. Indeed we were the first course in the Netherlands to create these features with Steve teaching the shapers from Heijmans each step of the way and it is in some ways a compliment to Steve Marnoch that other Dutch golf architects are now trying to emulate his style and innovation”

The project has two complimentary objectives – enhance the golfing interest, playing strategy and quality of the original layout and restore the degraded heathland habitat. Since the last ice age this landscape has evolved on a substrate of pure glacial sand. More recently, 20th century agricultural land use produced a very rich topsoil layer.

The remodelling concept was inspired on the existing ‘Dry Dales’ (glacial melt water channels), these are utilised perfectly as key strategic features on many of the holes.

Substantial areas of rich topsoil have been removed creating new areas or bare sand and heathland habitats, with additional ‘landscape ecology’ benefits; the large-scale heathland patches contribute to the creation of a new network of wildlife corridors at a National level, allowing species to move between the north of Holland and to the Rhine Valley.

The course has already selected by the R & A as great example of biodiversity and previewed within Golf Environment Europe (GEO) website.

At a time where many clubs are feeling the pinch, Golf Club Heelsum has been boosted by great revues and increasing green fees.

The club realise that to create a heathland course involves more than just a two year construction period and they decided to invest in Steve Marnoch so that he becomes the guardian of the dream ensuring that future committees understand and follow the principles set out by the current development committee for the new course.

Steve will visit the course regularly over the next seven years and liaise with the club Board and maintenance team to ensure that the design principles are met. Following in the themes of some of the great heathland course like The Hotchkin, Walton Heath, Alwoodley and Hankley Common and in maintaining the heathland appearance Steve will ensure that the course retains its fair playability for All levels of golfer.

Steve was disappointed, however, as his recent visit did not coincide with the grazing of parts of the course by over 250 sheep in controlling the broadleaf weeds and promoting the finer heathland grasses. “I would have loved to have seen the sheep on site at first hand; it would have been like being back in Derbyshire.” (see photo)

Steve Marnoch is actively planning and designing golf courses globally and has several projects in The Netherlands and Belgium.