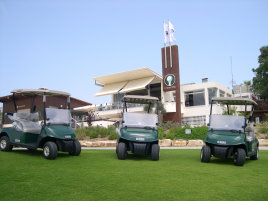 The Caesarea Golf & Country Club is the only 18-hole golf course in the country and was officially opened in 1961. In August 2007 a comprehensive remodelling of the course began, under the watchful eyes of renowned golf course architect Pete Dye, which included the redesign and reconstruction of the fairways and extending the course by 300 metres. The club re-opened on 1st May 2009.

Part of the overall refurbishment included the purchase of the new golf car fleet; 14 new electric buggies were delivered recently, with a further 14 arriving in the spring of 2011.

A.R.A.Z. Ltd has been marketing Cushman products in Israel since the early 1980s and was appointed as an E-Z-GO distributor in 1991, supplying industrial vehicles to hospitals, airports, universities and kibbutzim across the country.