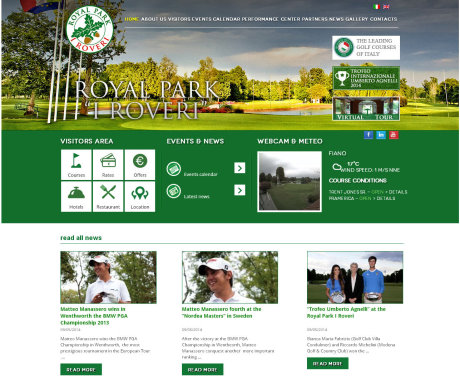 The Pramerica Course at Royal Park I Roveri confirms its excellence, only nine months after the official opening, joining the old course designed in 1971 by Robert Trent Jones Sr, and receiving the award of “Best New Italian Golf Course 2014”, in a ranking drawn by three golf magazines: Il Mondo del Golf, Golf Digest and Golf World.

An excellent example of integration between design and nature, the new course has a leading position in the global golfing scenario.

It represents the first Italian example of a golf course naming rights strategy, the result of a partnership between Royal Park I Roveri and Pramerica Life S.p.A., an Italian Company life branch of the U.S. Prudential Financial Group, Inc. *

Since the opening till today, the Pramerica course already saw some of important international professionals playing on it, such as Rafael Cabrera Bello, Stephen Gallacher, Emiliano Grillo and, of course, Matteo Manassero, flag-bearer of Royal Park I Roveri, who commented on the course: “I think it’s amazing that the Club has two courses so different from each other, although highest-level. The Pramerica is unique, due to its water obstacles and the harmony with which it fits into the surrounding nature. It’s a challenging and insidious course, which often requires a good long game and does not forgive mistakes.”

In recent months, the Pramerica has also hosted some famous football stars, including Michel Platini, Johan Crujff, Pavel Nedved and Alessandro Del Piero, who described it as “up-to-date, challenging, unforgettable, and very difficult”.

The Pramerica Course is the first European project that bears the signature of two well-respected architects: Michael Hurdzan, designer of some of the best golf courses in North America and recognized as “Architect of the Year” in 1999 and 2001, and Dana Fry, a Hurdzan partner since 1997 and elected in 2001 in the Top Five of the golf industry’s leading figures by the renowned magazine GolfWeek.

The Turin Golf Resort, as well as being the first Italian course included, since 2012, in the prestigious network “The Leading Golf Courses of Europe”, was also chosen by the International Board as its Italian headquarter.

Royal Park I Roveri is also listed in the Rolex guide of the best 1000 clubs in the world.

* Prudential Financial, Inc. of the United States (US) has no connection with Prudential Plc, a company based in the United Kingdom (UK)