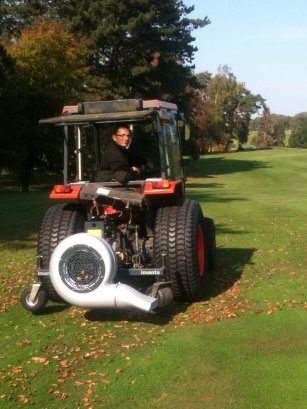 Harewood Downs Golf Course was built in the early 1900s and lies on chalk downlands and winds through undulating parkland. It is surrounded by woodland with groups of trees also along the fairways and dotted between the holes. Along with the usual issue of leaf clearance, Dominic has to deal with several varieties of pine, which although very attractive, create a problem when shedding their needles.

“We have a lot of trees and in the past have used back pack blowers and one pedestrian blower to control them in the early weeks of autumn. Later when the leaves fall in abundance we will use a collector, but aside from this our biggest problem is always the pine needles.” explained Dominic. “The hand held blowers are now powerful enough to move them and the previous options we have considered have been too expensive at around £4-5000. So when Jon Ryan from Browns demonstrated the Imants RotoBlast , I wasn’t just looking at performance but also value for money.”

The RotoBlast is a tractor mounted (3pt linkage) blower, designed to move leaves, grass clippings, thatch, litter and other unwanted surface debris. It is ideal for clearing greens and tees and fairways. Although small in comparison to other tractor mounted blowers, it is surprisingly powerful. “I admit I was initially worried that it would be under powered.” Said Dominic “But actually I am delighted with its performance. We cleared a 390 yard par 4 hole from tree line to tree line in under an hour last Friday and there was not a single leaf left on the grass. Amazingly it also cleared all of the pine needles without any bother.”

The RotoBlast is mounted on a wheeled chassis to allow contour following whilst maintaining a constant nozzle height above the ground. The wheels can be inverted to revert to a fully mounted option if required. It only weighs 100kg and can be lifted and moved around the workshop by one person when not mounted on the tractor. It has a capacity of 300m2/min with an operating speed of 0.6 -6.2mph, requiring only 25 -50 hp tractor power.