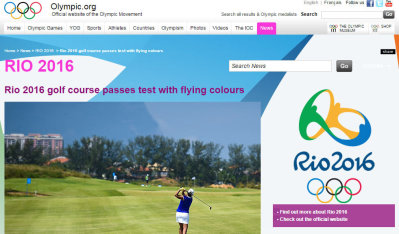 Alexandre Rocha, the highest ranked player in the men’s draw, finished tied for the lead with Rodrigo Lee tied on a three-under par 68. Miriam Nagl won the four-strong women’s competition with a four-under-par 67.

All nine participants were awarded a special medal by Peter Dawson, head of the International Golf Federation (IGF). Rio 2016 President Carlos Nuzman and Brazilian Sports Minister George Hilton were also among those in attendance.

“This is the future for us,” Rocha said. “Our existing courses are old and this is modern golf. We have plenty of land in this country to be able to make more courses like this.”

Meanwhile, the IGF President compared the course’s wide fairways with the iconic St Andrews Old Course in Scotland, though he predicted that competitors would be in for a challenging time once the greens firm up and the wind levels increase.

“It’s been a long haul to get here,” said Peter Dawson. “But at long last we’ve got a terrific golf course that’s going to ensure golf will have a successful turn in the Olympic Games.”

He added that “very little needs to be done” to get the course itself ready for the Games.

IGF Executive Director Antony Scanlon added: “We just need to attend to the details that will make the difference between a good tournament and a great tournament.”

Located 9km from the Olympic Village, the par 71 course, designed especially for Rio 2016 by Gil Hanse, will host two fields of 60 men and women in six months’ time.

The course is also helping to rejuvenate the area. A new report commissioned by the State of Rio de Janeiro Department of Justice and published in late February concluded that the course in Barra da Tijuca had “contributed to the growth of local vegetation” in the Marapendi area, and that various species of animal have in fact been returning to a “once degraded area”.

Among the environmental benefits in the report are the 167% increase in vegetation, which led to a “positive cycle for fauna development”, and the fact that 263 species are now found in the area – before the construction there were only 118 species.

The top 15 ranked players in the world will qualify for the Games, with a maximum of four from any one country.