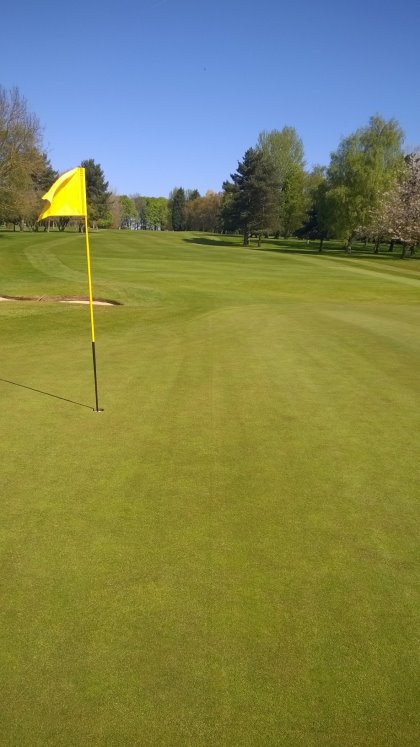 The use of Rigby Taylor’s R9 perennial ryegrass has enabled Hessle Golf Club to quickly recover from a calamitous situation when ten greens and their approaches were effectively destroyed.

“Within four-five weeks of sowing, we had at least 80 per cent coverage,” says head greenkeeper Martin Hayward. “The greens were back in play a month later and by the following May they were in perfect order and gaining plaudits from the membership.”

He continues: “We normally use Rigby Taylor’s R1 fescue/bent seed but because we had such a short growth window (starting in the September) Rigby Taylor – the company at the forefront of supplying innovative products for the successful management and maintenance of turf surfaces – suggested that to get the seed bed going we use R9 because of its ability to germinate in low temperatures. That, thankfully, certainly proved to be the case.”

R9 is a 100 per cent fine ryegrass and part of the Rigby Taylor ‘iCON’ programme of ‘low growth’ grass seeds which reduce mowing frequency but offer a host of advanced and unique specialised characteristics for high tolerance to wear, and drought and disease tolerance, for example.

Subsequent overseeding with Rigby Taylor’s R105 Browntop bent and the R9 at Hessle Golf Club “brought the greens back to full glory and, cutting down to 3.5 mm/4 mm, the greens were (and still are) playing with no noticeable difference to our front eight which are predominantly meadowgrass”, adds Martin.

While he re-affirms all the stated advantages of R9, he also especially highlights the seed’s disease tolerance: “During one 10-week period last autumn when we had particularly wet and mild weather, other local clubs were spraying weekly, for predominantly Fusarium. But we sprayed just twice – and that was purely as a preventative measure.”

Martin – who has 15 years’ greenkeeping experience and has been head greenkeeper at the club for three years – employs a Rigby Taylor-derived monthly maintenance programme based on a mix of granular and liquid fertilisers which, depending on the time of year embraces:

The long-established (since 1898) club, which has been on its present site since 1975, also includes a six-bay covered driving range, a short game area and a practice chipping green and bunker with putting green.

Hessle’s 10th and 11th greens suffered a calamitous situation, but the use of Rigby Taylor’s R9 ryegrass helped them – and eight other greens – to quickly recover

South Africa’s Casey Jarvis has signed a staff player contract with TaylorMade as he begins his career in the professional ranks at this week’s Sunbet Challenge on The Sunshine Tour.