The famed Yorkshire course, originally laid out by Tom Dunn in 1891, has previously benefitted from architectural input from the likes of British Open champion Alex (Sandy) Herd and Alister MacKenzie. However, it was the bunker designs of Herbert Fowler which played the greatest role in establishing the course at Fixby as one of the best in the north of England.

Having recently celebrated its 125th year Huddersfield Golf Club has set about returning the course to its former glory under the guidance of William Swan. 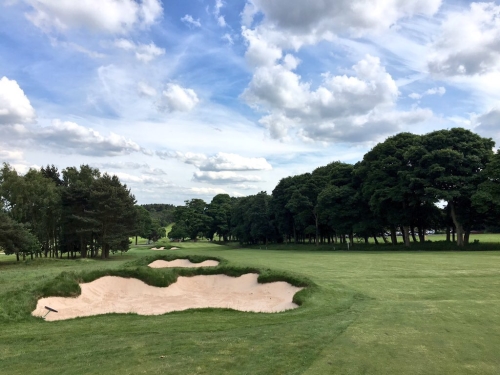 Working alongside Course Manager Ben Turner and golf course contractor Profusion Environmental, Swan has designed and overseen the implementation of a Herbert Fowler inspired programme of bunker renovation, reinstating the classic look of the moorland layout whilst introducing a modern, maintenance reducing construction specification. During the first two phases of work 33 bunkers have been relocated and reshaped, with a further 16 planned for the final phase to be completed later this year.

In addition to the bunker renovation, the project team are adding several new tees, modifying green surrounds and gradually restoring the open moorland landscape through selective tree and scrub removal.

William Swan adds: “As the official home of Yorkshire golf, Huddersfield Golf Club is well known to golfers throughout the north of England and a regular host of regional and national events. The course ticks all the boxes in terms of the challenge and variety it offers, with the added benefit of tremendous views from its elevated position atop the West Yorkshire moors. It is a privilege to have the opportunity to work on such a layout, helping the club restore some of the fine architectural features lost over the last few decades.”

Swan Golf Designs is one of the UK’s leading experts in golf course renovation and restoration. The work at Huddersfield is one of several such projects being led by SGD throughout the UK, with construction taking place at Aberdour, Bangor, Barton-on-Sea, Chiltern Forest, Corhampton, Holywood, Moray, Saffron Walden, Stirling and Wellingborough golf clubs.