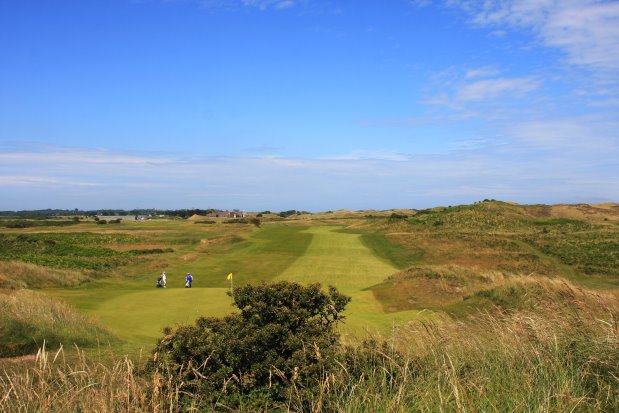 An influx of ‘clumpy’ ryegrass on the greens, approaches and surrounds at the Island Golf Club in Donabate, Dublin has now been treated successfully, thanks to Rescue selective herbicide from Syngenta, which is exclusively distributed in the UK and Ireland by ICL.

Surrounded by the Irish Sea and located in some of the most stunning dunes on the east coast of Ireland lies The Island Golf Club. Founded in 1890, it is a traditional private members’ golf club and is one of the oldest clubs in Ireland.

As The Island’s Links Superintendent David Edmondson explains, the course is played on by keen golfers from all-round the globe.

“Players from the likes of America, Europe and the UK all come to test their game on The Island. It’s raw, natural, and unique. Its ruggedness and natural terrain is what really sets it apart. On a windy day, it is pure Links golf at its finest.”

However, maintaining such a course does pose a few challenges and when David started seeing an evasion of problematic ryegrass appearing on his greens, he knew he had to take action.

David explained: “We brushed, groomed, over-seeded and top dressed, but the coarse ryegrasses never seemed to go away,” he said. “I spoke to a few people who had been using Rescue on Links courses in both Ireland and The UK and they told me that they had achieved great results from the product. All the feedback I received seemed to point to Rescue being the solution I was looking for and so I proceeded to apply the product to six of the greens in year one and all greens in year 2. The results have been fantastic and a number of our members have commented to me on how improved the putting is on them.

“Following the greens, I then turned my attention to the approaches and surrounds and fairways because there were a lot of rye present within the fescue and it has really cleaned them up.

“Discoloration of the ryegrass was evident within 10 days, followed within a week by wilting and dying back of the coarse grasses. The sprayed areas were then recovering and showing positive signs of an effective treatment and overseeding with Fescue”