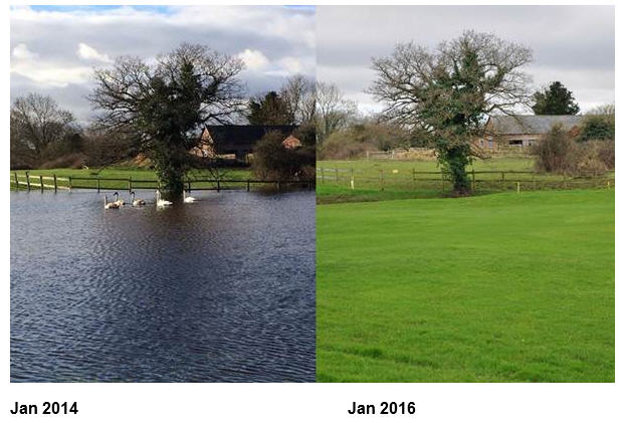 Drainage work carried out at Parley Golf Centre as part of its £250,000 programme of improvements has already had a remarkable effect. Where once greens and fairways would be under several feet of water during wet periods, the same ground this winter remained dry.

Contrasting pictures show swans on the water in 2014 but this year at the same time and place the fairway was playable despite similar heavy rainfall.

Contractors from MJ Abbott of Salisbury have been working through the winter to help transform the centre into the finest practice facility in the region.

A vast new practice green is being constructed and there are many innovations being added, including a simulator which is already up and running.

The re-designed nine-hole course will provide a round of 18 holes with a total distance of 5,111 yards.

A new short game practice area is also being created, which will have chipping areas and practice bunkers and ultimately will be floodlit, and this will be situated on the ‘reclaimed’ land.

Daryl Dampney, manager of the centre, said: “It was very important for us to address the drainage issues on a single part of the course. We have added drainage ditches but also have significantly raised the ground level in areas.

“The work is ongoing but we have been really pleased this winter because despite the rainfall it has not flooded as it once did.

“We are creating what we plan to be the finest practice facility in the area and it will include indoor and outdoor elements and be suitable for children and beginners as well as professionals.”

The event takes place from 20-22 October and ensures the annual meeting of the golf travel professionals can still take place, even in these testing times

The family run club with its backdrop of the Yorkshire Three Peaks, proximity to the Dales and Forest of Bowland has attracted golf tourists from across the country. Its ‘on course’ cottages and high-end vacation pods have offered something different and proved hugely popular