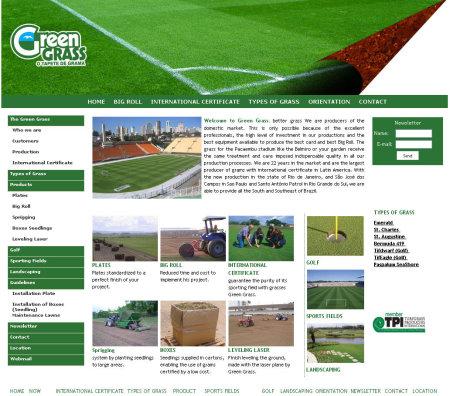 Green Grass sod farms of Brazil was selected as the sod producer to grow Zeon Zoysia grass to be planted on the brand new golf course currently under construction for use at the Olympic Games to be held in 2016 in Rio de Janiero. The 2016 Games marks golf’s return as an Olympic sport after more than a century’s absence. Golf has not been a sport in the Olympics since 1904.

Marcelo Matte is the owner of Green Grass sod farm in Brazil. He said the choice of Zeon Zoysia, an environmentally friendly, drought-tolerant turf, as the grass for the Olympic golf course’s roughs, fairways and tees, will have tremendously positive repercussions in both the world of golf, and in the turf industry in South America.

“This is the first time golf is in the Olympics after 100 years and we’ll have the whole world watching the best players for weeks in Rio. I can imagine it will be the most important golf course in the year of 2016,” Matte said.

Matte said he began the process of Green Grass becoming a licensed producer of Zeon Zoysia in November 2011, when he visited Bladerunner Farms to talk personally with David Doguet, a widely known and respected turfgrass breeder who is the owner of Bladerunner Farms, and Don Roberts, an expert in international turfgrass operations, a consultant to Bladerunner Farms.

In his many visits to the United States since 1997, Matte said he researched the latest methods for turfgrass production, and sought to license the highest quality turfgrasses available in the marketplace to bring them back to Brazil. Green Grass was “the first sod farm to have Big Rolls in South America and the first also to sprig jobs,” Matte said. “We licensed Zeon Zoysia as a part of this search for the best varieties. It is a turfgrass that already has a solid position in the market and is considered the Number 1 landscaping preference. Now that the best golf courses are going to lower maintenance and environment friendly grasses, Zeon is the perfect choice.”

Green Grass has four sod farms locations: one located in the south of Brazil, two near Sao Paulo city, and one near Rio de Janeiro. All are less than 60 miles from the main cities in Brazil. Green Grass has nearly 700 hectares (1,750 acres) under sod production. Green Grass is unique and innovative in the Brazilian turf industry, Matte said, as they are the only sod farm that uses all imported equipment, (harvesters, mowers, central pivot irrigation, installers, sprig planters, etc.), and employs the latest sod production techniques in turfgrass production, including making sure all proprietary sod varieties are certified for quality and genetic purity.

“Brazil is a developing country that has grown a lot in the last 15 years,” Matte said. “It is the 7th economy in the world based on the local industry, agricultural and mining and also will host the 2014 soccer World Cup. The Olympics in Rio will shine a spotlight on Brazil, Green Grass and Zeon Zoysia.”