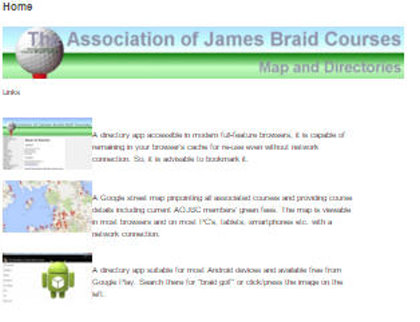 Since this time last year, 12 new clubs have joined the Association of James Braid Courses – Blanagask, Blackburn, Cochrane Castle, Galashiels, Grim’s Dyke, Hexham, Middlesburgh, The Musselburgh, Porthmadog, Tynemouth, Willesley Park and Aberfeldy. During the year, after some discussions, it was discovered and agreed that Braid had a hand in designing Aberfeldy, a fact unknown to most until now.

In his lifetime James Braid designed, in whole or in part, some 412 courses, 32 of which are no more and 6 were plans only and never built. Now with over three hundred courses members of the Association, some 150,000 members of these courses can play at the other member clubs for a special green fee, hopefully increasing awareness of his work and providing extra income to the clubs who have joined.

Each member has access to a map and a mobile app available free through the home of the Association, Henley Golf Club (Braid 1907) www.henleygc.com  or www.sites.google.com/site/ajbmap/

To become a member, courses have to be either, designed, redesigned or altered by Braid. As well as designing courses, he was the Professional at Walton Heath from 1904 till his death in 1950, won the Open five times, plus numerous other  competitions and along with Vardon and Taylor formed the PGA.

For more information or to join michael@herriot9345.freeserve.co.uk

For more information on Braid:

Golfers and business professionals looking to see out the UK winter under Portugal's sunny skies are being invited to stay at Quinta do Lago Resort, which has an array of self-contained cottages and apartments for long-term lettings.

Gullane Golf Club in Scotland has installed a large all-weather practice tee from Huxley Golf as part of a major upgrade to its practice facilities.

Former women's world No.1 Annika Sorenstam has been elected president of the International Golf Federation Board following current incumbent Peter Dawson's decision not to seek re-election following a 10-year spell in the role.