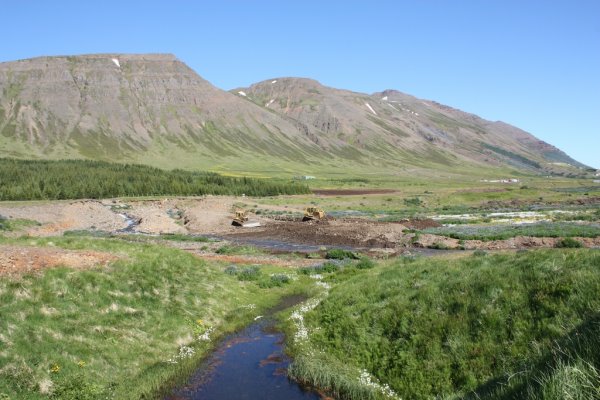 Construction has started on what promises to be an all-round outdoor recreational resort featuring a new hotel, golf course and renovated skiing facilities in Siglufjordur, a small fishing town on Iceland’s north coast – a once isolated community with little else than the nearby Arctic Circle on its horizon.

Now, less than two years after the opening of a new tunnel placing Siglufjordur along a new, popular and scenic coastal detour off Iceland‘s Highway No. 1, the town may again see glory days like those of The Herring Era, when Siglufjordur was the commercial capital of Iceland. After the era‘s abrupt end in 1968, when there was no more herring, the town‘s population has gradually decreased. Today, Siglufjordur is home to around 1,200 Icelanders.

Construction on a new golf course – designed by Edwin Roald – started in June 2012. The course is scheduled to open in the summer of 2015, which is also expected to see the opening of a new hotel in Siglufjordur‘s marina, developed and operated by local leisure developers Raudka ehf – led by investor Robert Gudfinnsson. Raudka has invested significantly in improvements to the town’s attractions and infrastructure in an effort to strengthen the old fishing village as a destination for both domestic and international visitors.

Without a clear indication of where funding could come from – if at all – Siglufjordur Golf Club invested in the development of the golf course idea in 2009 by appointing golf architect Edwin Roald to masterplan the golf course as a center-piece of an all-round outdoor recreational haven in an abandoned gravel quarry with damaged eco-systems. Leaders of Raudka were impressed by the concept, which was started and promoted by Olafur Karason and Ingvar Hreinsson, both heavyweights in the existing Siglufjordur Golf Club whose forty year old nine-hole layout will be abandoned once the new course is ready for play.

Now, Raudka and the local authorities have joined forces in a landmark deal and established the Leyningsás Foundation around a large five-layered development project including the new hotel and golf course, further development of the already popular ski slopes, re-location of unsightly industrial units, and a more concentrated effort in town planning to achieve a common goal in making the town of Siglufjordur an enjoyable place to live in and visit.

The new golf course – nine holes – will sit partially in the gravel quarry, at the intersection of the Hólsá and Leyningsá rivers. The quarry has been left open for a decade since the last truck loads of gravel were extracted. The golf course is designed to thoroughly insure that its construction will include much-needed restoration of aquatic ecosystems, especially habitats for sea-run Arctic charr, that have been severely damaged during years of gravel extraction from the river bed. The rivers‘ natural reaction has been to shift material from further up to compensate for the loss below, exposing banks to erosion and rendering parts of the rivers unpassable for the charr due to severe elevation changes and increased water velocity. The restoration work has been supervised by ecological consultant Bjarni Jonsson, who believes that the project will earn the rivers a place among the most promising and yielding charr rivers in the north ofIceland– an interesting prospect for angling enthusiasts.

Other parts of the course will meander in and out of a mature pine and spruce plantation that has been painstakingly developed by decades of volunteering by members in the local forestry society. This is now one of the region‘s best kept secrets among recreational woodlands.

The golf course will also include a network of public footpaths and bridle ways that will complement the town‘s existing path system and unite both new and old attractions and landmarks, the oldest appearing in the form of historic ruins to which there are written references from the year 1400 and beyond. Their preservation will be included in the golf course management program, and further education on the site‘s history will be provided by modest information signs for both golfers and other nature lovers.

The golf course architect and Leyningsás Foundation see this project as a prime example of how golf can be used as a valuable initiative to restore and clean-up damaged land and ecosystems, while at the same time taking positive steps forward to attract both visitors and future inhabitants.

The golf course will have little or no chance of ever being extended to eighteen holes, a standard openly questioned by Edwin Roald on his website, Why18Holes.com. Golf is very much a nine-hole game in Iceland, one of the world’s most vibrant golfing nations where more than ten percent of 320,000 Icelanders are reported to play golf. Forty-eight of the country’s sixty-seven courses have nine-holes, most of which are found in or near remote fishing villages along Iceland’s shores, where the population is measured in hundreds rather than thousands.

The new course will be among Iceland’s most northerly golf courses and will offer memorable views northbound to the mouth of Siglufjordur – from which the town takes its name – a place where the midnight sun barely touches the horizon before climbing back up just a few minutes later, painting the sky in bright red.

The proposed additions and improvements to the town‘s infrastructure and leisure facilities will complete what will essentially function as a ski, golf and angling resort, an exciting mix when combined with the renowned Herring Era Museum, quality restaurants and spectacular nature.