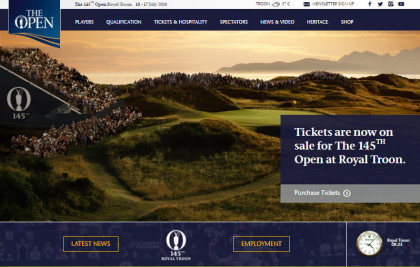 Four of the UK’s finest golf courses will become Final Qualifying venues for The 147th  Open Championship in 2018.

Qualifying for golf’s oldest and most international Major Championship will take place at Notts (Hollinwell) in Nottinghamshire, Prince’s Golf Club in Kent, The Renaissance Club in East Lothian and St Annes Old Links in Lancashire from 2018 until 2021.

The new venues cover the north-west, central and southern regions of England and Scotland to make the qualifying events as accessible as possible for players. They will replace the current venues – Woburn, Royal Cinque Ports, Gailes Links and Hillside – where this year there will be twelve places in total available from these venues with a starting field of 288 players.

Among those who secured their places at Final Qualifying in 2015 for The 144TH Open at St Andrews were two-time US Open champion Retief Goosen, Irishman Paul Dunne, who went on to lead the Championship after the third round and played in the Great Britain and Ireland Walker Cup team, and his fellow Walker Cup player American Jordan Niebrugge, who went on to finish tied sixth and win the Silver Medal as the leading amateur.

Johnnie Cole-Hamilton, Executive Director – Championships at The R&A, said, “Final Qualifying is a hugely important part of The Open Qualifying Series and provides a gripping spectacle as leading Tour players compete with club professionals and elite amateurs for places in the Championship. The success that Jordan and Paul enjoyed last year shows just what is possible for those who qualify and gives players a huge incentive to follow in their footsteps.

“We very much appreciate the support we have received at the current Final Qualifying courses and look forward to moving on to four outstanding new venues in 2018.”

Notts (Hollinwell) has hosted professional Tour events, including the Dunlop Masters, and was the venue for the Brabazon Trophy in 2015. Matthew Fitzpatrick won the Boys Amateur Championship there in 2012.

Gene Sarazen became the Champion Golfer of the Year at Prince’s, when it hosted The Open in 1932. The course has also been joint host of The Amateur Championship on two occasions and will do so again in 2017. It hosted the Curtis Cup in 1956 and the 2006 Ladies’ British Open Amateur Stroke Play Championship and this year it will host the St Andrews Trophy (20 and 21 July) and the Jacques Leglise Trophy (26 and 27 August).

The Renaissance Club opened in 2004 and, along with neighbouring Muirfield, will host the Boys Amateur Championship this year.

St Annes Old Links has been a qualifying venue for The Open on many occasions, most recently in 2012 and has held a number of elite amateur events including the English Women’s Open Amateur Stroke Play Championship last year.