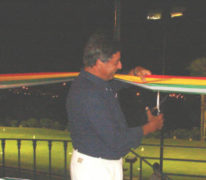 Undeterred by the challenging economic climate of the past year La Quinta has continued to heavily invest in the development of its first-class facilities.

€2 million has been invested installing a new irrigation system and a re-design of key holes. Course C now boasts two brand new par 3s. The 2nd is a daunting par 3 of 182m from the white tees over water (see photo below).The 6th another new par 3 of 133m built into the mountainside and offering spectacular views across the Mediterranean.

The project has been supervised under the watchful eye of former Ryder Cup player Manuel Pinero and directed by Head Superintendant Antonio Pineda to conform to the new decree set out by the Junta de Andalucia.

Don Borja Pascual (Club Vice-President) commented: “I am delighted we will be one of the first clubs in Andalucia to follow the new decree and I am certain the improvements will vastly improve the playability of the course.”

La Quinta once again plays host to the Benahavis Senior Masters for the second successive year on 15th-17th October 2010 and the changes to C course will prove a significant challenge to the very best on the European Seniors Tour.

The event will see some of the game’s greatest names gather in Marbella, Former Ryder Cup captain Sam Torrance will be joined by the likes fellow Ryder Cup stalwart Costantino Rocca, defending champion Carl Mason, and of course, designer of the La Quinta course, Manuel Piñero.