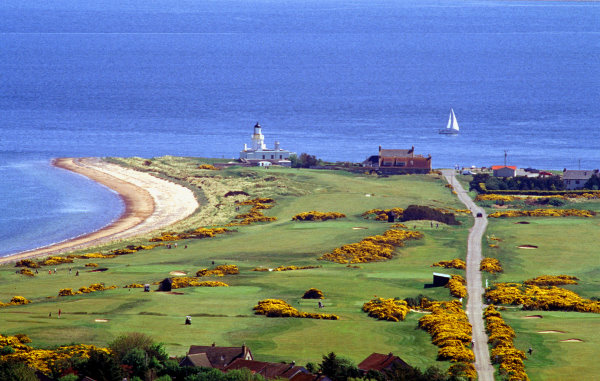 A visit to Fortrose & Rosemarkie Golf Club in the Highlands of Scotland is your opportunity to play on one of the most unique links courses in the United Kingdom, writes Club Secretary Mike MacDonald. With our new bar and lounge area facilities combined with the good fellowship and camaraderie of a superb club our links course is a must on your golfing calendar. Fortrose & Rosemarkie Golf Club is an excellent place to share time with friends, to meet new people, and to be a member as we offer fantastic benefits both for the members close to home and for any overseas members amongst you who would like to take advantage of the many benefits of being a member of a Scottish Links Golf Course.

The course was re-designed by the five times Open Champion James Braid in 1932 and in addition to our proud history the Club offers members, their guests and visiting golfers fantastic practice facilities which includes a 300-yard long practice area, driving bays, 3-bay practice nets, golf ball machine, practice bunkers, short game practice area (with green) in addition to the real ‘gem’ in the course itself. Our unique Scottish Links Golf Course is situated amid stunning scenery being just 15 miles from the City of Inverness, 30 minutes from the nearest airport at Dalcross which is beside Castle Stuart Golf Links and only 45 minutes from the world famous Royal Dornoch Golf Club.

There is reference to golf being played here at Fortrose & Rosemarkie as far back as 1702, though it was not until the 29th September 1888 that the golf club was first established with a membership of fifty playing over six holes. Play was suspended during the First World War when the clubhouse was used by the Highland Cyclist Battalion as a guardhouse!  The course was extended to 18 holes by 1924 but it was ten years later before James Braid shaped the links to its current design and Sir Hector Munro opened the revamped course 1935. War intervened again in the early 1940s when the military requisitioned the course and clubhouse as a training ground during the Second World War but all 18 holes were back in play by 1947.  Fortrose & Rosemarkie lies out on a narrow peninsula named Chanonry Point, just north of Inverness – jutting out into RosemarkieBay – protecting the entrance to the Moray Firth. The road to the lighthouse divides the course in two, with just enough land either side to accommodate a 5,890-yard long golf course which is soon to be extended to over 6000 yards.

What Fortrose & Rosemarkie may lack in yardage is more than made up for with its small, subtle, quick greens, strategic bunkering, dense island gorse and the proximity of the sea at nearly half the holes. Playing to one’s handicap, especially with the wind up on this exposed sliver of land is never easy. Length is not everything on this course – the 455-yard par five 4th hole is not stroke index 1 for nothing and the degree of difficulty is obvious to the visitor when standing on the tee.

Fortrose & Rosemarkie proudly hosted two national competitions during 2010, the first time the club has ever attracted such prestigious events to the Black Isle. The first tournament was the SLGA Scottish Senior Ladies Amateur Championship when Fiona de Vries of St Rule beat defending champion, Heather Anderson of Alyth 1 up in the match play final. The other contest saw a three-man team of Carrickvale from Lothians win the SGU Scottish Club Championship by a winning margin of three strokes over second placed St Andrews.

The Club also has in place reciprocal agreements for all playing members, which will provide you with a discount of at least 50% when playing the following courses – Royal Dornoch, Brora, Moray, Nairn Dunbar, Golspie, Tain, Inverness and Forres.

There is so much uniqueness to our links course with a setting not found anywhere else being surrounded on three sides by the water, we can guarantee fantastic views. And being so close to both Royal Dornoch Golf Club and Castle Stuart Golf Links why not visit and play because, as well as the views, we offer excellent value for money and you can be sure of a warm welcome.