Largest investment in Scottish Borders golf for over 10 years 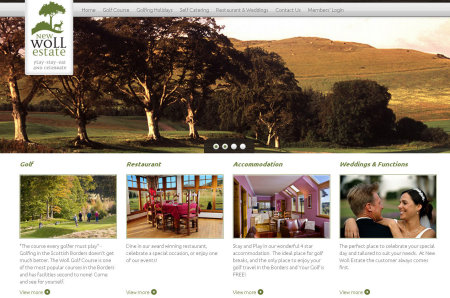 The Borders is seeing the opening of one of the most exciting golf and business developments and the largest investment in golf for over 10 years in the Scottish Borders. The Woll golf course at New Woll Estate, Ashkirk is opening its newly redeveloped holes on the original course this weekend

Developed to USGA specification the new greens are doubling in size and the entire surrounds, bunkers, ponds and fairways have been redesigned to take the course to a whole new level.

Designed by Richard Le Sueur of Golf Design Scotland, the holes are being heralded as some of the best in the South of Scotland. Agronomist Jonathan Pendry advising the course confirmed that the new greens were comparable in construction, design and finish to the best in the world. With turf supplied by Tillers Turf, whose clients include Muirfield, Wentworth, Gullane, Archerfield among others provided the highest quality turf and the final product is near perfection.

With international shaper Shane Ringwood and local contractor Dougie Renwick of RDR construction also working on the project the results are ‘amazing’.

A member who recently returned from the Masters, claimed some of the holes are ‘better than Augusta’.

The development was brought forward due to a poor season for the greens in 2013.  The original green’s surface sealed and dramatically lost grass coverage this appeared due to the original design of the greens which were literally cut out from the field in which they were designed. The new USGA construction guarantees there will be no return to that sort of problem.

In the face of poor economic and membership conditions in the Borders the Directors of the Woll saw the development as not only essential but a strategic step forward.  As one of the only privately owned courses in the Borders along with the Roxburghe and Cadrona the Woll Directors know the pressure on courses is huge with competition for members and visitors fierce, however evidence shows the best quality courses and facilities are building on their success while others are left behind.

The course cements itself as one of the premier venues and already boasts one of the largest memberships and attracts more visitors than most in the Borders.

That aside the Brown family have been continually developing the course and facilities for more than 12 years and there are plans going forward for further improvements on the course.

Not many clubs have such a lucky membership seeing continual improvement but a growing membership shows the Directors are making the right moves. Director Nicholas Brown describes the improvements.

The first hole Has been lengthened, raised and pushed right up next to the river which runs through the course so not only do you hear the water running by, you need to cross it on your second shot and avoid it at the back of the green.  Quite tricky for an opening hole as it is a dog leg par 4 over the water that very few people can reach with a drive.  A huge challenge and with 2 new bunkers protecting the front of the green it is a special start to the round.

Again lengthened due to the increase in the size of the green the 13th is a long par 4 with a new aspect rising from front to back and encircled by new mounds and swales it draws the golfer in to green past the fairway bunkers and provides a new back drop to the green.  The new bunkers now visible from the tee are there to focus the eye and the mind!

Possibly the signature hole on the course this uphill par 3 has an amazing setting and new design with false front, huge catch basins and surrounded by mature trees and rhododendrons it is a joy to look at but one of the hardest holes on the course

Again this could be the signature hole of the course with a massive elevated tee and row of Huge mature trees over 100 years old lining the right side of the hole and the Estate drive and young woodland to the left! The new green complex is a masterpiece with shapes incorporating the already exciting ground conditions and the largest bunker on the course protecting the right hand side of the entrance to the green.

What can be said……it needs to be seen to be believed with water running in front of the tee, the full length of the hole on the right side and now a newly developed pond encircling the front of the green and forming an island this hole is a maker or breaker for your card right at the end of the round!  The shapes of the green complex are awesome!

It is fitting that the last hole should be of grand proportions and the new green complex and bunkers that surround the 18th make it stand out, right in front of the clubhouse.  With the old stone dykes and mounding to the rear as a back drop and reshaping of the entrance to include new bunkers the hole looks almost inaccessible from further down the fairway. When approaching though, the scale of the green and shapes to the surrounds actually make the hole easier to play and a very enjoyable finish.”