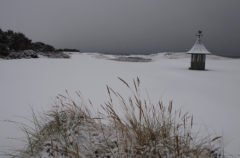 Kingsbarns Golf Links celebrated its tenth anniversary season in style with a 30% surge in Visitor rounds of golf played.

More than 27,000 rounds were played this season over the famous links capping an excellent season. Such was the increase in demand that the season was extended by two weeks in November to accommodate additional play.

Kingsbarns also recently cemented its position as one of the UK’s finest courses when it was ranked 11th in the prestigious Golf Monthly Top 100 courses.

Stuart McEwen, General Manager at Kingsbarns, said, “We are absolutely delighted with the way the season has gone especially as we celebrated such a major milestone. We have now passed the 280,000 round mark since the course opened in July 2000 and that is testimony to the excellence of the course design and the hard work of the greenkeepers and other staff here who help to ensure the course and facilities are in top class condition every day of the season. The signs are already looking good for 2011 with bookings up by 10% on this period last year and we look forward to another ten years of success.”

The staging of the Open Championship in nearby St Andrews placed Kingsbarns in the spotlight and led to some of the greatest golfers ever to have played the game making the short trip down the coast. Tom Watson, Gary Player and Lee Trevino took to the fairways and were warm in their praise for Kingsbarns.

While the course condition attracted widespread praise throughout the season, Kingsbarns also excelled off the course with caddie manager Davy Gilchrist being named the Caddiemaster of the Year in the Golf Tourism Scotland Annual Awards for the second year in succession.

“We work very hard to ensure that golfers enjoy an outstanding experience when they play golf at Kingsbarns and leave with wonderful stories to tell,” said Davy. “Caddies have a huge role to play in that regard with 60% of all visitors taking a caddie for their rounds. I am fortunate to have such a great team here and they are fully committed to providing the highest standards of service.”

Kingsbarns reopens for the 2011 season on 1 April. The green fee for next season is £185 with a 50% discount for golfers playing a second round within seven days.