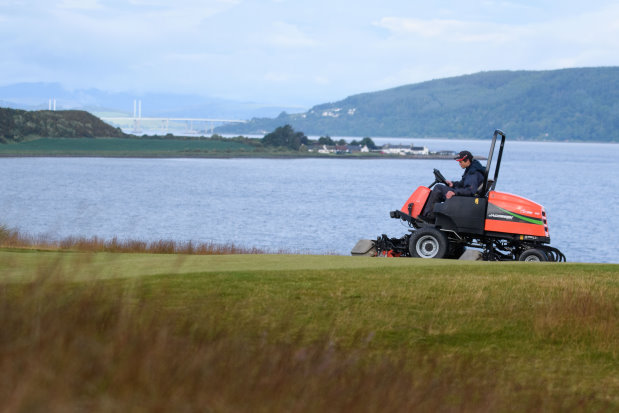 While some of the world’s best players battle it out on the course at the Aberdeen Asset Management Scottish Open, an international field of volunteers has helped to ensure the event runs smoothly.

The highly acclaimed links course overlooking the Moray Firth has been looked after this week by a 46-strong army gathered from across the world to make sure it was in pristine condition for the tournament.

With strong winds affecting conditions, particularly on Day One of the tournament, it’s been a tough challenge for the team. Gusts of 43mph on Thursday saw balls oscillating on the greens, leading the course team to avoid cutting, while other days cutting was necessary to maintain speeds on the putting surfaces.

Chris said: “It’s been a challenge, but the team has loved being involved in the tournament. It’s been a steep learning curve for many of them who do not have the experience of such a large event and the organisation that goes with it. But the feedback I’ve had from them has been very positive. Hopefully they have learned a few things they can take back to their own courses”

The visiting contingent included Australians Peter Fraser, from Hervey Bay Golf Club in Queensland, and Mick Pearce, from Northern Golf Club in Melbourne, who are making their first visits to Castle Stuart.

Mick, who has worked at two US Opens, Olympic Club in San Francisco in 2012 and Chambers Bay, Washington in 2015, said: “I wanted to come as this is a proper links style golf course. I thought Olympic Club was the pinnacle in organisation, but this has been on a par or better. It’s been brilliant and an absolute pleasure working here. And I can never get sick of the views.”

Peter, who was on his first trip overseas, was keen to learn more about tournament preparation: “I’ve been working in greenkeeping for 16 years but have never had the opportunity to get involved in a tournament like this. I’ve really enjoyed it, seeing how everyone works together. It’s been a great experience.”

Stefan Nilsson, is also part of the Scottish Open team where he has been adding to his knowledge of low-input management of golf courses while at Castle Stuart.

Stefan, who is on the board of the Scandinavian Turfgrass and Environment Research Foundation, is course manager at Vallda Golf & Country Club near Gothenburg which is seeded with fescue grass like Castle Stuart that provides enhanced sustainability.

He said: “It’s been interesting to see a tournament like this and how you handle such a large team of greenkeepers. I’ve also been able to discuss maintenance using fescue grass and being as environmentally friendly as possible, which is the way to go.

“I’ve learned a lot here and it’s been good to see how dedicated the team are and the attention to detail shown. It’s been a great experience.”

Keeping the crowds safe and in order involved another near military operation involving 260 marshals a day, as well as another 180 volunteer scorers. These non-paid helpers were of all ages, from 18 to late 70s, from all walks of life, including ex-police and services personnel and included couples and family members.

They were on the course from before 7a.m. until after 8p.m. keeping people in position, ensuring player and spectator safety, acting as course guides, first aiders, and even finding lost children. One missing child this week was re-united with anxious parents within minutes after a radio call was made to the marshal network.

These dedicated volunteers came under the supervision of Chief Marshal Bruce Duncan and his son, Steve, the Deputy Chief Marshal.

Bruce, a former police Chief Superintendent, and Steven, currently an Inspector with Police Scotland, have been involved in all four Scottish Opens at Castle Stuart, and started planning for this year’s event in January. Since then more than 2,500 emails were sent by Steven bringing the team together from across Scotland, as well as from England, Norway and even one from Qatar, while Italy and France was represented among the scorer marshals.

“A large percentage of people come year after year so they know their role inside out”, said Bruce. “They are all full of enthusiasm for the event and the venue. Many are keen golfers themselves so they want to promote the area and encourage people to come here.

“Having a police background can help as it can bring a bit of structure to things; we are used to operational procedures, the use of radios etc. And the fact that people are ex-police or services means that if something happens people stay cool and get it resolved.”

Many of the volunteers are attached to other local golf clubs and Steve said it can present a challenge compared to events further south: “Somewhere like St Andrews has a large number of clubs within a very small catchment area. However, while we have great support from a number of clubs nearby, the catchment area is much wider so people have to travel further. The furthest daily commute to Castle Stuart I know about is to Durness (over 100 miles).”

Stuart McColm, Castle Stuart Golf Links general manager, said: “The staging of a major event such as the Scottish Open is a huge logistical operation. We are deeply indebted to our volunteers on the course and behind the scenes for their  outstanding work and dedication over the last few days.”