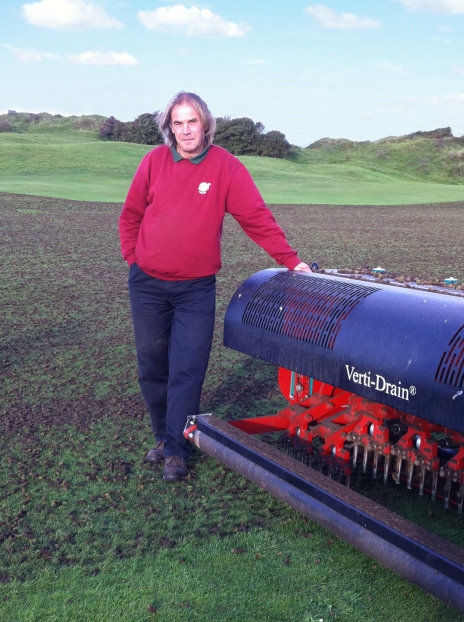 Saunton Golf Club on the north Devon coast was established in 1897 and now has 36 holes on two links courses. Significant renovations have taken place over the last 25 years, with greens and tees on the West course and tees on the Old (East) course rebuilt, and two irrigation systems added. Last year saw the addition of a new water storage lagoon and in 2011 one green was tweaked to give more pin positions and the surrounds renovated.

This programme of continual investment and improvement takes place on a course which is busy year round and where the winding progress of play through the dunes means plenty of wear and tear from golfers, particularly at ‘pinch points’.

Advice from the club’s agronomist prompted Course Manager Ray Day to investigate the purchase of a high speed aerator, which would facilitate more frequent treatment of the fairways. “Because of the high levels of traffic, our agronomist suggested getting more air into the soil profile, which being of a fine, sandy nature tends to get compacted. We have traditionally decompacted the fairways once a year, but it was clear that it needed to be done more often. We have had Verti-Drains for 20 years and they perform extremely well on the greens but more output was required to get across the fairways on a regular basis.”

A conversation with a local dealer led to a demonstration of Charterhouse Turf Machinery’s new 2220 Verti-Drain. Designed to combine high speed operation with the ability to work deeper, to an impressive 9.5in, this machine targets deep pans of compacted soil which can prevent free drainage and inhibit grass growth.

The 2220 is the first high speed decompactor to accept 1in tines, giving increased heave and with a working width of 2.0m, it is ideal for large areas such as fairways. “It was taking all winter to do all 36 fairways just once but this machine will do each fairway in just two and a half hours, so we should be able to get across them all, two or three times this winter,” explains Ray.

First job for the Verti-Drain 2220 when it was delivered this autumn was to hollow core to a depth of 5in, taking out thatch and creating a ‘dressing’ for the fairways. “We can use a variety of tines which is a big advantage,” comments Ray. “In the winter months I will fit a 10in, three quarter inch diameter tine with a bit of heave which will produce an 8-9in hole, but it can vary depending on the conditions. This versatility has proven itself on our smaller machine which is used with everything from pencil to needle tines.”

On a sand-based soil, the distinctive cracking from the Verti-Drain’s action is less pronounced, but Ray says its ability to get air into the ground is crucial. “We can generally get out on the course right through the winter to Verti-Drain; there are a few wet areas but it is only frost that stops us. It’s a different matter to when I was working on parkland courses inEssexand we couldn’t get tractors onto the course for much of the winter!”

The Verti-Drain 2220 is powered by a 45hp Massey Ferguson tractor, so despite its impressive output, does not demand excessive horsepower. However, Ray points out that the tractor must be correctly weighted and balanced. “It’s an easy machine to operate and we’ve had a number of Verti-Drains over the years, as well as the three we have now, so we know that they are durable and reliable. We’ve got a good relationship with our local dealer too and when they suggested the new machine it was the obvious choice. Why go elsewhere when you know the Charterhouse Verti-Drain will do the job?”