High Legh Park GC getting back on track

First opening in 2001, High Legh Park, near Knutsford Cheshire was designed in detail by Steve Marnoch, director and senior designer of golfmarnoch Limited.

Marnoch also supervised the construction of the course following a developer-produced routing plan. He worked alongside the then Ryder Cup Captain Mark James who is generally credited for the design.

Mark recognised Steve’s input in the design of High Legh when he wrote in Steve’s copy of the book ‘Into the Bear Pit’ – the hard-hitting inside story of the Brookline Ryder Cup, “As I got most of the credit for High Legh, perhaps you’d like to take some of the credit for this book, I think not”

With quite complex ground conditions, constraints and history the development of the course was not straightforward. There was a former military training ground where several ‘live’ munitions were unearthed during the works hence the local bomb squad became a regular visitor to the site.

Part of the land had restrictions on earth movement heights due to the high ratings given to the soils in some areas by MAFF. There was part of a Roman Road to be carefully studied pre-construction and, to top it all, and despite being so close to Manchester (part of the country not renowned for being dry!), there was no available water source for the irrigation. This resulted in a treatment plant being developed to make the water from the nearby sewage plant suitable for use on the course.

Now under new management and ownership. 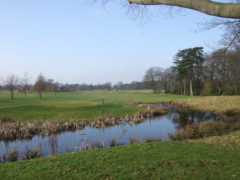 With his knowledge of the course it was logical that Steve Marnoch was asked to review the course routing (something which he was never allowed to do originally) and to make suggestions to consolidate the course from 27 holes within an awkward site to a really strong 18 hole layout with full size practice facilities.

“I am delighted to be asked to come back to High Legh to rationalise the course. There are some amazing holes which have been allowed to overgrow and the vision of Andrew Vaughan to bring the course alive again and to much better standard than before is really refreshing and I feel strongly about being a supporting part of that to ensure that the course becomes as good as it should be.”

With a careful study of the course combined with his past knowledge of the site, Steve Marnoch has developed a scheme that exceeded the brief, providing a strong 18 holes par 72 course of around 6,827 yards including a great practice range near the existing clubhouse. “

“There were always some tight areas on the original layout that of which I advised the developer at the time when I worked on the detailing in 1998. Now I have been able to demonstrate how, with minor changes, the site can accommodate a great 18 hole layout. Some of the former 27 holes had been allowed to go ‘fallow’ but these allowed greater flexibility in my design options and for more space to given to the 18 hole layout.

“My particular favourite is the combination of two parallel par four holes to produce one classic risk-reward hole with twin fairways hole #8. This will give the members and visitors great excitement during the round deciding whether to take the short cut or play the long way around. It could also be said that the new layout may arguably produce the two toughest starting holes in Cheshire.”

Having already held some local professional tournaments the course has a history of visiting professionals. A few years ago High Legh Park entertained four budding South African golfers as they acclimatised themselves ahead of The Open Championship. For six weeks the young men utilised the full course and practice facilities describing this as a ‘fantastic experience’ in a very kindly written letter to the club, signed by all concerned.

Just after this years epic final showdown in the US Masters at Augusta a member of staff at High Legh realised that not only was Masters Champion, Charl Schwartzel’s signature on the letter, so was the signature of last year’s British Open winner at St Andrews – Louis Oosthuizen.

Delighted with the discovery, current Club Director Martin Cooper said: “It’s good to know that such talented golfers appreciated the golfing facilities at High Legh Park and have gone onto be so successful.”

Everyone at High Legh is now hoping that the other men who signed the letter – James Kamte and Albert Kruger – go onto win their own major tournaments so the club can boast its very own grand slam!

Steve Marnoch is looking forward to his future involvement at High Legh Park in bringing the development plans to fruition so that the members can enjoy the revitalised course.