Harradine Golf announces the re-design and completion of holes 1-3 at the Jebel Ali Hotel Golf Course which closed for construction on 20th May and re-opened for play on 23rd September. This very short period only gave the contractor two and a halve months for the grow-in of the grass. Quite an achievement! 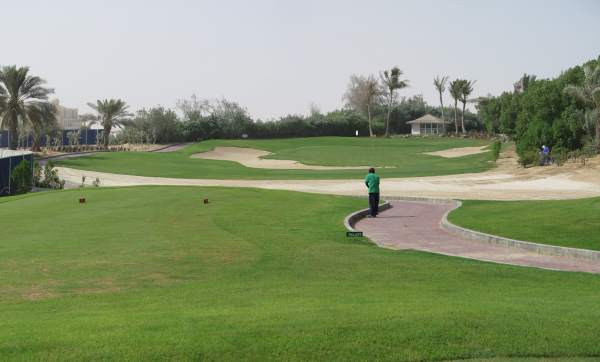 The re-design was necessary due to the construction of a new hotel at the North East corner of the resort grounds. The round will now start with a PAR 4,4,3 configuration instead of the original 5,3,4. The very popular track which also hosts deer and peacocks that roam freely on the course was also the venue of numerous PGA Challenge matches.

The re-design includes new tees and the lengthening of the driving range to a total of 388 yards thus making it possible to be played from both ends. The second hole is a 331 yard slight dogleg to the right over some trees and is a theoretical “driveable” Par 4. However, landing on the green with the drive is not for the faint-hearted as it is defended by a bunker on the front right corner and a new lake on the left-hand side.

The new holes were designed to provide an attractive view from the new hotel and Harradine Golf are sure that many guests will either want to play or try the game as they observe the course and players from their vantage point.

HG has also provided tees on the hotel side of the driving range in order to further entice guests to this great game!

740 new trees and shrubs and 1600 tall grasses were planted to ensure that the new holes retain the original character of the course which already featured many mature trees. The maintenance team took the opportunity of the closure to drastically renovate holes 4-9 and HG hopes that the new holes will not disappoint the regulars.

The original course was opened in 1995 and has always been a great favourite for tourists and Dubai residents.