The members-only Ban Rakat Club – www.brc.co.th – is now taking shape some 35-40 minutes from centre city Bangkok on the site of the former Kiarti Thanee Country Club, which partnered in 2017 with Yokohama International Golf Club Co., Ltd., the Japan-based golf development and club operations firm, to redevelop the property in its entirety.

“We approached the owner of Kiarti Thanee with the idea to create something entirely new in the Bangkok market and it’s our strong feeling that Ban Rakat Club and Ballyshear Links will do exactly that,” says Takeyasu Aiyama, chairman of Yokohama International. “Gil Hanse came with the highest of recommendations: Mr. Bill Coore, who led the redesign of our West Course at Yokohama Country Club, recommended Mr. Hanse for the Ballyshear project and introduced him to us.

“The Ban Rakat Club project will perfectly showcase Mr. Hanse’s skill and expertise, while introducing his work to an Asian audience for the first time. What’s more, vintage design projects such as Ballyshear have never before been undertaken in Thailand. In these and other ways, Ban Rakat Club will bring something completely unique to the market.”

Thailand already boasts the most sophisticated golf market/culture in all of Southeast Asia, with some 200 courses in operation, Asia’s strongest incoming golf tourism sector, and more than a million native golfers. But climate and culture have also meant that vintage “Golden Age” design projects have never been attempted here.

The Golden Age of Golf Design, a period roughly bounded by the two World Wars, just happened to produce an outsized number of American masterpieces. Many came from the hand of architect Macdonald and his protégé Raynor, whose unique templating of classic, old world holes proved foundational to this Golden Age.

At Ballyshear Golf Links, Hanse has deployed the very same templates, harnessing the same early 19th century sensibilities that have made Hanse Golf Design the most sought-after course architecture firm in world golf.

“For my firm, this project is very exciting and special,” says Hanse, whose original designs include the Olympic course in Rio de Janeiro and the much-feted Black Course at Streamsong Resort in Florida, USA — his renovation works includes prep work for two of the next three U.S. Opens, at Winged Foot GC (2020) and Los Angeles CC in 2023. “This is our first project in Thailand. It has also provided us the opportunity to design a golf course on a very unique piece of land — deploying a philosophy that relies heavily not just on the history of this game, but its strategic history.

“The design of Ballyshear is based on the principles and philosophies espoused by two giants of vintage course architecture, Macdonald and Raynor, who made their marks by replicating in America specific golf holes from classic Scottish links: The Redan at North Berwick, for example. The Alps hole at Prestwick… These holes represent our inspiration and aspiration at Ban Rakat — just as they inspired Macdonald and Raynor at hallowed grounds such as The National Golf Links of America, Chicago Golf Club, and specifically Lido Golf Club.”

The Lido Club was a celebrated Macdonald/Raynor design that debuted in 1918, on Long Island, outside New York City. The course was revered in its time but acquired some of its mythic qualities once it was abandoned during World War II. Prior to its construction, the American magazine Country Life held a design contest, whereby the winning entrant would have his hole actually built by Macdonald at the Lido Golf Club. The winner? None other than Alistair Mackenzie, then a complete unknown who had never designed a golf course. He would go on to design Royal Melbourne, Augusta National and Cypress Point.

Another entrant? Seth Raynor himself, whose runner-up entry (called Dog’s Leg) was also realized at The Lido Club — and reproduced at Ballyshear’s par-4 2nd hole. Indeed, the name of Raynor’s entry has become part of golfing vernacular the world over. 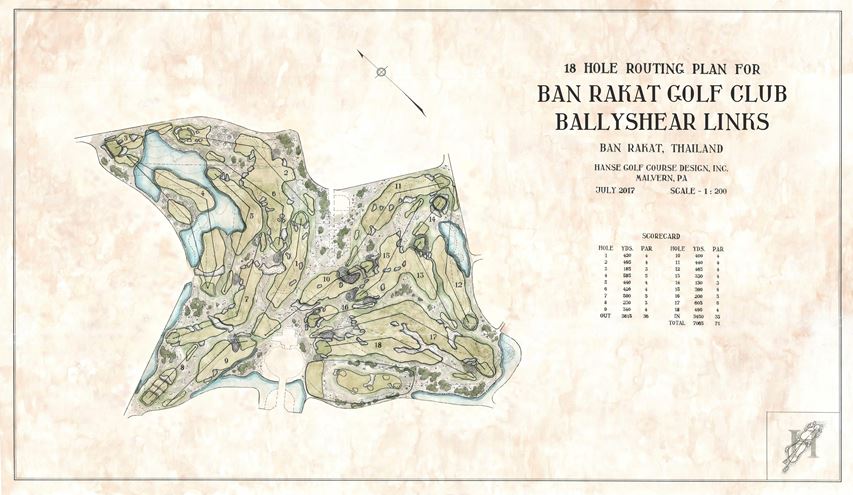 You want more homage? In 1913, after decades of searching for the perfect location, the wealthy Macdonald built his ancestral estate on Long Island (overlooking his iconic design at the National Golf Links of America and the club next door, Shinnecock Hills). Macdonald would dub this new home Ballyshear.

“The serendipities surrounding the Lido Club are legion, but it’s our design model at Ballyshear because its terrain so resembles the terrain here in Bangkok,” Hanse reports. “As a result, the character of this golf course will be like nothing else in Thailand.”

The singular qualities of Ban Rakat Club (BRC) are not limited to the golf course:

“This decision to eliminate outside play immediately creates an exclusive member experience that simply does not exist in the Bangkok market,” explains Atsushi Kaneko, Overseas Managing Director at Yokohama International, who adds that full-membership at BRC will be limited to 300, with several types of limited memberships also available. “Our company has managed clubs here in Thailand for many years. We well understand the difficult many members experience simply trying to secure Saturday and Sunday morning tee times — at their own clubs! When golf is reserved for members only, this issue is eliminated.”