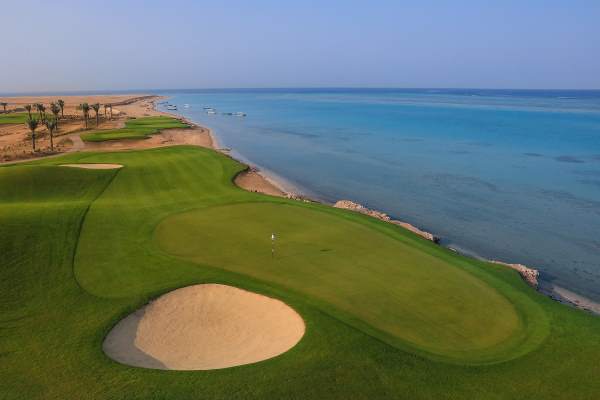 He was closely followed by European Tour Chief Executive, Keith Pelley, Els and Johnston themselves, and Ladies European Tour players Amy Boulden, Camilla Lennarth and Maha Haddioui in taking to the first tee for the very first time.

During an action-packed weekend, the professionals were joined by Othman Almulla, a prominent member of the Saudi National Team and Claude Harmon III, one of the world’s leading coaches. Together, the group delivered clinics for beginner golfers and were treated to a taste of both traditional and modern Saudi culture at a grand gala dinner, where they were greeted by Saudi ardha dancers.

After the Grand Opening Exhibition Match, in which Ernie Els and Haddioui were narrowly defeated by Almulla and Boulden in a fun three-hole scramble, the South African Hall-of-Famer, said: “The opening of Royal Greens Golf and Country Club is a landmark moment for golf in Saudi Arabia. This golf course is spectacular and, with its setting upon a stretch of pristine Red Sea coastline, I’m sure it will quickly become one of the most recognisable and most popular destinations on any worldwide tour.”

Royal Greens has been chosen by the Saudi Golf Federation to host Saudi Arabia’s first ever European Tour event, which will welcome the great and good of the game in January 2019. The Federation announced the event at the Grand Opening and confirmed the participation of top players, including: World No.1, Dustin Johnson; Masters Champion, Patrick Reed; Ryder Cup Captain, Thomas Bjorn; and World No.13, Paul Casey.

Home to a state-of-the-art Golf Academy and extensive long and short-game practice areas, Royal Greens also cemented its status as a pillar of the sport’s development in the country with the signing of an MOU with the Saudi Arabian Golf Federation. This agreement will see Royal Greens and master developer Emaar the Economic City work with the Federation to attract more novice players to the game, support the elite National Team via access to its outstanding facilities as Saudi’s flagship golfing destination and consult on the development of new golfing facilities in The Kingdom.

“The Grand Opening of Royal Greens Golf and Country Club signals the beginning of a new era for golf in Saudi Arabia and we are delighted to introduce it to the world,” said Fahd Al-Rasheed, Group Chief Executive Officer and Managing Director of Emaar the Economic City (EEC), the master developer of King Abdullah Economic City in which the club is located. “This facility will be regarded amongst golf’s very best, and will become a launch pad for the next generation of Saudi golfers looking to make their mark in the game.”

Managed by Troon, Royal Greens Golf and Country Club is undoubtedly one of the most impressive facilities in golf, both on and of the course, boasting an impressive 9,820m sq clubhouse, including ballroom, health club and award-winning spa, as well as fine dining restaurants and an elegant tea room.

Top picture:  Ernie Els and Andrew Johnston are joined by traditional Saudi ardha dancers ahead of the gala dinner