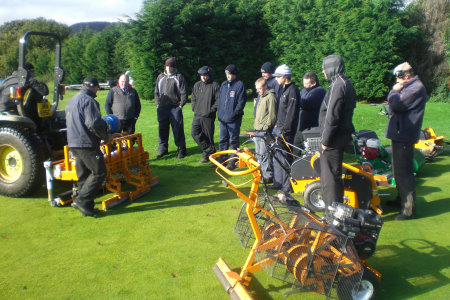 Responding to popular demand by golf clubs and Greenkeepers on the Isle of Man, Dennis & SISIS recently took to the road again.  The company’s ‘Golf Machinery Roadshow’ was held at three venues with the Dennis/SISIS team putting together a practical hands-on demonstration of their equipment to a total gathering of over 50 people at Douglas Golf Course.

The delegates were split into working groups covering a range of pedestrian and tractor mounted maintenance equipment for greens, tees and fairways including aerators, scarifiers, slitters, sweepers, mowers and seeders.  All of the island’s golf clubs were in attendance, as well as the local department of education.

Murray Jones, Head Greenkeeper of Douglas Golf Club, was so impressed with the Variseeder 1300 that Douglas Borough Council have now purchased one for the course.  “The variable speed rates that give the Variseeder its name make for really quick operation”, he commented, “and I was so impressed at how easily it could sow bents and fescue.”

Summing up for the delegates Murray expressing his thanks, “Not only was the day extremely beneficial and informal, Dennis & Sisis provided the opportunity to meet colleagues in the same industry and hear from them.”