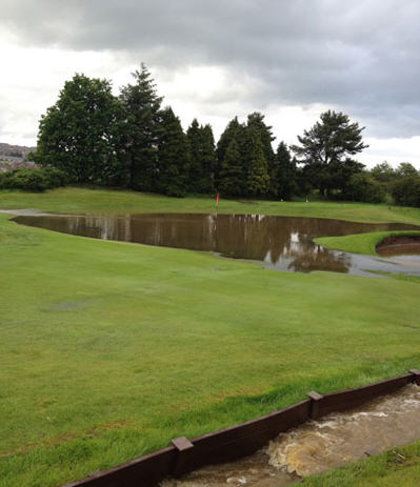 Thirteen golf clubs across the north of England have received a total of over £50,000 from Sport England to help them repair damage from the winter floods.

The awards from the Emergency Flood Relief Fund ranged from just over £2000 to £5000. Only one club had its application refused and another was deferred for more information.

Abbie Lench, England Golf’s Head of Club Support, said: “We’re pleased that so many clubs were able to access the emergency fund, it has been gratefully received.  Sport England have produced some additional guidance around flood planning and flood prevention and clubs which would like to find out more can email info@englandgolf.org”

Among the successful clubs was South Moor in Durham (pictured) which was shut for over four weeks after persistent rain flooded the course, damaging the paths and one of the greens where a drainage pipe collapsed. Even when the course re-opened golfers who relied on buggies were unable to play because of the damage to the paths.

The club received £4,926 towards the costs of repairs and Guy Carr, a member of the club’s general committee, remarked: “The grant application was very straightforward, we had a reply within 10 days telling us we would get the money. We couldn’t believe how fast it was, they were fantastic.”

South Moor has become expert at accessing funds – receiving over £100,000 in five years – and it was also able to help two other clubs to make successful applications for flood relief.

South Moor urges other clubs to follow their example, which has brought financial support for a par three course, an Astroturf short game practice area, including an extra putting green, a driving practice area and refurbished changing rooms.

The club’s trigger for making the most of available grants was its invitation from England Golf to host the 2011 McGregor Trophy, the international open championship for U16 boys.

“We wanted to upgrade the facilities and that started the ball rolling,” said Guy. Their local council granted them £23,000 – and the club was later able to show that the championship had put £200,000 into the local economy.

The clubs which successfully applied for emergency flood relief are: