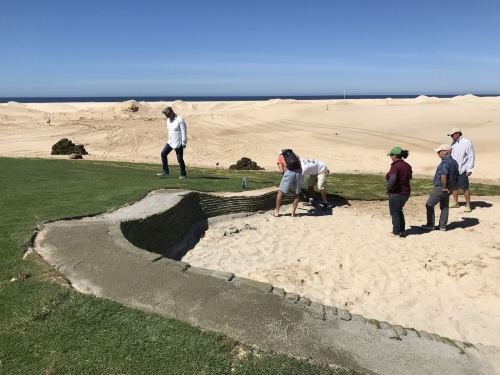 EcoBunker Ltd CEO Richard Allen, who recently travelled to the project site to advise on the construction of the bunkers, said: “The Norman firm had experience of our product at Medalist in Florida, and as Rancho San Lucas is an oceanfront site, wanted the course to look as much like an authentic links as possible. That meant bunkers with a revetted edge.

“These are notoriously difficult to maintain in a warm season environment, where natural revetting turf typically lasts little more than a year – the soil and root matrix does not bind the turf wall together in the way cool season grasses do, so when there is heavy rain, the soil washes out of the structure and the wall collapses. Due to the rhizatomous (creeping) nature of most warm climate grasses, it is also very difficult to retain the classic layered aesthetics.”

The course, which sits at the southern tip of Baja California, with the Pacific Ocean to the west and the Sea of Cortez to the east, is being developed by Mexican firm Solmar. Norman associate Danny Fore is in charge of the day-to-day design work, and project manager John Nurminen is supervising construction.

Nurminen had not seen anything like the EcoBunker process before. He said: “I was sceptical at first about bringing an artificial substance into a natural environment. But after seeing the installation process and the way it fits together, I am more than impressed – I’m blown away.”

“The construction crew, from Mexican contractor Par Tres Golf, had never done anything like this before – in fact they had never even built natural revetted bunkers,” said Richard Allen. “After two days very intensive training they reached a high standard and with careful supervision I’m confident they’ll do a great job.”

The EcoBunker system, which benefits from several exclusive engineered upgrades, is now available worldwide directly or via a network of local distributors. In the USA only, the system is known as PermaEdge. PermaEdge is currently distributed under licence from EcoBunker Ltd, by IVI-Golf.