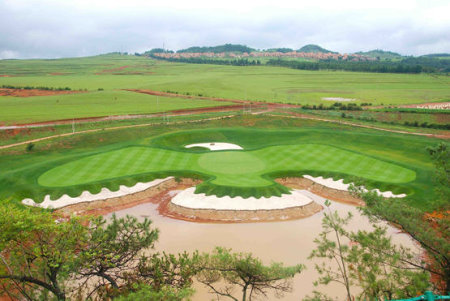 A golf club in China has unveiled its answer to South Africa’s extreme mountain hole, which attracted worldwide attention when it opened in 2009.

Sky Oasis Golf Resort, 100 kilometres north of Kunming in south-east China, has opened its Eagle hole, a creation by US golf architect, Cynthia Dye, that is built in the shape of an eagle.

Currently available only to Sky Oasis members, the hole will eventually be open to visitors too for a fee of RMB 200 (approx. $US30) for two balls, with the chance to win a jackpot starting at RMB 20,000 (approx. $US30,000). As more players try their luck at the hole – and presumably fail – the jackpot will increase.

As an extra hole at the 36-hole golf resort, the Eagle hole promises to put golf in Kunming, the capital of Yunnan Province, on the map internationally. Its opening coincides with the launch of a new golf marketing group in the region, Golf Kunming of which Sky Oasis is a member.

The Eagle hole was conceived when Cynthia Dye, a niece of American golf design legend Pete Dye, was surveying sites for possible extra courses at the resort.

The group came across a cliff overlooking an alpine meadow, which resembled an eagle on the contour map. As they inspected the location at sunset, a gust of wind from the plain below provided an uplifting feeling, as if soaring above the landscape like an eagle.

And so the eagle hole was born.

As a result, Sky Oasis, which opened in 2009 and was originally known as Skyait Golf Club, now seems set to soar into the consciousness of Chinese golfers and international golf tourists.

The club’s owner and general manager, Catherine Keung Lee, says visitors will be able to play the hole eventually, although a date hasn’t been set.

“The hole reminds us of the extreme hole at the Legend course in South Africa,” she says. “Now we have created another legend. Let each player who comes here feel the eagle swooping.”

The clever design is not only visually intriguing, it creates a sense of uncertainty when playing the hole from the elevated tee. With a lake in front of the green, the tendency is to hit too long, even though the vertical drop is only about 40 metres – compared with a 400-metre drop for the extreme hole at the Legend Golf and Safari Resort in Limpopo, South Africa.

Whereas South Africa’s extreme hole is shaped as the map of Africa, the eagle hole is much more intricately designed. Steep, narrow scalloped bunkers protect the area in front of the eagle’s wings and feet, just beyond a lake that catches short shots. The eagle’s head and beak is also a bunker, with a brown rock as its eye. One wonders what the eagle will think when the first person scores an eagle on the eagle hole?

Spring Citywas built when there were fewer than 100 courses in China. Despite unprecedented growth of golf, with more than 500 courses now in play, the Lakes layout has been rated number one or two in the country for more than a decade. The mountain course is currently ranked number five.

USGolf Digest also places the Lakes course as number 93 in its top 100 courses outside the United States.

Set among karst rock formations formed 300 million years ago, Stoneforest International Country Club’s three 18-hole layouts designed by the US team of Schmidt-Curley are visually exceptional. Its A course, playing 7241 yards from the black tees, has at least a dozen holes that have golfers reaching for a camera before hitting a golf ball. Its B course is equally impressive. Another 18 holes is open only to members.

Stoneforest opened in 2009 and is currently completing a hotel and villas, which will provide stay-and-play options. But the course is close enough to Kunming to enable a day trip – or ideally, a visit can be combined with visits to Spring City and nearby Brilliant Resort & Spa.

The twin 18-hole layouts at Sky Oasis Golf Resort are both open to visitors, with on-site villas and a hotel catering for stay-and-play guests.

There are numerous daily flights to Kunming from China’s major cities as well as Hong Kong, Bangkok and Seoul.