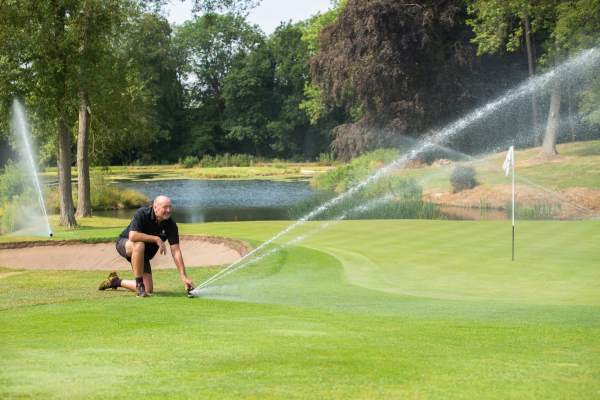 Course manager John Smith explains: “When our previous control systems began experiencing communication errors and electrical breakdowns, we didn’t know if the grass was getting the water it needed. The systems urgently needed to change, but we didn’t want to unnecessarily overhaul all the wiring and pipework.

“Completely replacing everything would have resulted in huge costs, but with the help of Reesink Turfcare’s Toro irrigation team, including Peter Newton and Cevan Edwards, we discovered we only needed to upgrade the two control systems and have saved a lot of money thanks to the renovating rather than replacing.”

“The install went without a hitch,” John recalls: “Before upgrading the systems, Toro technicians came to check the 28-year-old wiring would be compatible with Lynx and, finding that it was, returned in the winter of last year to undertake the renovation. Four guys made fast work of completing the install in just one and half weeks, with no disruption to golfers or our maintenance programme.”

Delighted with Lynx, John enthuses: “We’ve been using Lynx since April of this year and, as the oldest Marriott Hotel in the world with a reputation to uphold, having a comprehensive system we can rely on to irrigate both courses has given us great peace of mind. Now we have total control over when water goes on, the flow rate, and the trajectory. Lynx has really improved the efficiency, versatility and reliability of our irrigation routine.”

Having been witness to how well Lynx performs, John decided to add to the renovation project by upgrading the sprinklers, too, hoping to see even more benefit to the club’s irrigation. The perfect partner to Lynx, Toro Infinity sprinklers have replaced the sprinklers across multiple greens on the Championship Priory Course that were “in need of updating.”

John says: “We chose to start changing our sprinklers over to Infinity for improved performance and ease of maintenance. What I like about the new sprinklers is that to perform any kind of maintenance you can access everything you need from the surface. Being able to make changes without digging up or replacing bodies is a real time and money saver. Plus, the sprinkler heads have diversified nozzles offering a range of trajectories to suit the changing needs of the turf. As a result, we’ve decided to phase an Infinity upgrade on all of the greens over the next few years.”

With the successful renovation behind it, Breadsall is looking to further innovate the way it irrigates the courses: “Using Lynx and Infinity from April has already made the quality of our turf far better, which is so important for our ancient site. Next up, we want to extract water from our lake to irrigate the courses and, given the great experience we’ve just had with Reesink, we will be working with them again to improve our lake’s water quality with an Otterbine aerator,” John concludes.

Reesink Turfcare is an official distributor in the UK and Ireland for Toro professional turfcare machinery and irrigation products for the golf, sport and amenity sectors. It is based at 1 Station Road, St Neots PE19 1QH. Call 01480 226800, email info@reesinkturfcare.co.uk or visit www.reesinkturfcare.co.uk

View the Premium Entry for Toro Irrigation in The GOOD Directory