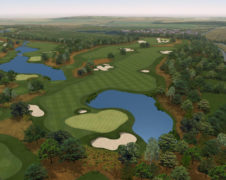 Ryder Cup hero and 2011 Iberdrola Open champion Darren Clarke has unveiled the vision for his signature championship course at The Angus, a new five-star resort in Scotland’s golfing heartland.

The Angus, an 18-hole course making the most of the contoured landscape it will occupy, is the centrepiece of the £55 million development near Broughty Ferry, Dundee

Designed to complement the world-famous Carnoustie links and deliver another outstanding playing experience close to the home of golf at St Andrews, The Angus follows in the footsteps of Clarke’s existing courses in Ireland and South Africa.

Crafted to challenge professionals through to amateur players, The Angus is set over more than 200 acres with the course having a variety of tee platforms playing to some 6,300-7,000 yards.

It will be backed by the region’s first five-star hotel, providing luxury accommodation to match the stunning expanse of the golf course. The development expands on the existing golf leisure development, Forbes of Kingennie Country Resort, at the site.

“When you first glimpse the landscape where The Angus will take shape, you can’t help but feel you’re somewhere Mother Nature intended for golf. It’s a stunning location which, as it matures, will become an even more memorable experience.

“I first stayed at Kingennie during the Open at Carnoustie in 2007, and fell in love with the place – it’s beautiful and perfect for a championship course.  The plans Mike Forbes has for The Angus as not just a golf course, but a leisure resort, are so impressive.

“When Mike asked me to get involved in The Angus, my eyes lit up at the prospect of getting to design a signature course. His passion to succeed reminds me of my own drive to win.  We’ve worked so hard ever since that first day to create something special, for my fellow professionals to the keenest amateur.

“I’m working alongside the very talented people at Team Niblick, led by golf course architect Graeme Webster, who have laid the foundations for the course by blending the classic traditions of golf with their innovative and exciting approach to course design.

“We have some beautifully contoured land to work with and, being so close to Carnoustie, a short drive from St Andrews and on the road north towards Royal Aberdeen, The Angus really is in a magical position. I can’t wait to play it myself.”

In addition to The Angus links, the resort will also include a world-class golf youth academy led by one of Tiger Woods’ renowned coaches, Rudy Duran.

The new facility will create more than 200 full-time jobs following completion of the development, with some 300 posts being generated during the construction phase which is forecast to boost the local economy by £19.2million. Local authority officials and councillors approved the plans in November 2010.

Mike Forbes and his team are now in discussions with international operators who will take the realisation of The Angus project forward, with a focus on specialists in the United States, China, South Africa and the Middle East, whose expertise will ensure the facility and the area achieves a global reputation.

In 1995 Mike developed Kingennie Fishings, a four loch trout and coarse fishery which has become one of Scotland’s most visited fisheries, attracting more than 10,000 visitors a year.   Mike is a former fly fishing champion and captain of the Scottish fly fishing team and in 2003 the venue hosted the Scottish National Coarse Fishing Championships.

Kingennie, which has grown to become a popular wedding venue, also features a waterside restaurant and bar, alongside banqueting facilities.