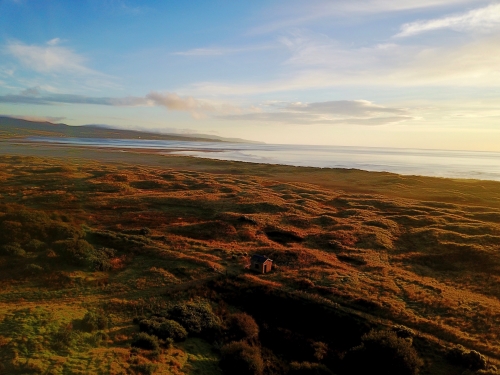 The golf course will be constructed in and outside the Loch Fleet Site of Special Scientific Interest (SSSI) which currently extends to 1,232 hectares. After significant layout revisions as a result of public comment, the golf course will incorporate a total footprint of 22.7 hectares.  As a result of careful planning, the course will include only a 14.0 hectare footprint inside the SSSI (1.1% of the total SSSI area) and 8.7 hectares outside. Further, the developers have agreed to fully remediate 5.7 hectares inside the SSSI of a felled tree plantation which together with Scottish Natural Heritage (SNH), has been deemed environmentally compromised.

Mike Keiser, said: “Coul Links will present one of the most memorable golf experiences in the world. Its location, less than 1.5 miles from legendary Royal Dornoch Golf Club with nearby Tain, Golspie and Brora Golf Clubs as well as The Carnegie Links at Skibo Castle all just minutes away combined with Castle Stuart Golf Resort, Nairn Golf Club and several others a short drive away, will likely establish a third major destination of Scottish golf.”

Todd Warnock said, “After two years of meticulous preparations, extensive community input, as well as open and thorough dialogue with a broad range of organizations and statutory bodies, we are excited to file our planning application. We are confident the project will result in an enhancement environmentally of the Coul Links SSSI as well as significant economic benefit to the East Sutherland and national Scottish economy.”

Bill Coore, of Coore & Crenshaw golf course architects, said “In thirty-one years, Ben and I have been blessed to work with some truly special sites but none more special than Coul Links. To work with this site, in the birthplace of the game we revere, is an honour we accept with great humility, dedication and appreciation.”

Jim McGillivray, Chairman of The Embo Trust, said “Urras Euraboil – The Embo Trust is fully behind this project and excited about being an equity investor, partner and signatory on the planning application.” Edward Abel Smith, land owner of Coul Farm said: “We are fully committed to Coul Links golf course and view it as the best use both environmentally and economically for this beautiful site.”

The planning submission is a result of an extensive two-year process. Extensive ecological and hydrological surveys have been undertaken and used to refine and inform the project. The developers also commissioned a Biodiversity Net Gain Report for SNH which is included in the Environmental Statement (ES), which concluded the project will deliver “Clear and Material Biodiversity Net Gain”.

Transformational Economic Opportunity for The Highlands and Scotland

Consultants BiGGAR Economics were retained to produce a full Economic Impact Statement. Furthermore, in order to ensure the integrity of the report, the developers asked Highland and Islands Enterprises to meet with the BiGGAR Economics team to challenge their analysis. The developers have committed there will be no hotel or real estate development on the site, so the economic benefits will accrue to the local economy. The BiGGAR report estimates Coul Links to generate, over the first 10 years, approximately 250 new jobs and over £60 million gross value- added to the local economy and approximately 450 new jobs and over £85 million gross value-added to the Highlands economy. HIE Chief Executive Charlotte Wright said, “Golf tourism is a growing international market that is already benefiting many parts of the Highlands and Islands, including Dornoch. The work carried out by the Coul Links team and their consultants shows that this project has the potential to deliver a significant economic impact for the town, and be as asset for Sutherland. We look forward to continuing to work with the team as their plans develop.”

Embo Trust to be Equity Investor and Partner in Coul Links

Over the last year, the Embo Trust (ET) inquired with the developers regarding the prospect of investing in Coul Links as a demonstration of community engagement and their support of the project. The developers have granted ET the right to conduct fundraising and invest capital into the project as an equity investor, thus serving on the Board and receiving a long-term income stream. ET will launch a fundraising effort upon approval of the planning application but have already made a firm £5,000 commitment. Mike Keiser and his wife Lindy have agreed to provide a 5-to-1 matching grant to ET for the entire fund-raising campaign.

The developers are also delighted with the addition of Chris Haspell to the project team. Formerly, Course Manager at Castle Stuart Golf Links, Chris led the on-the-ground development of the Castle Stuart course which shares many attributes with Coul Links including SSSI, dune heath and migrating birds. The success of Castle Stuart’s integration into the natural environment has been widely praised including the receipt of several environmental awards.

Chris has worked closely with SNH for several years on many environmental matters and led the sensitive construction methodologies developed for Castle Stuart, including successful translocation techniques for dune heath and marram grasses. Prior to Castle Stuart, Chris spend 12 years working in Denmark and for several years the Danish Golf Union, consulting closely with environmental bodies and government.

Mike Keiser said: “Coore & Crenshaw and I have a vision of building golf courses within the natural environment. Hence, we are tremendously excited to attract someone of Chris’s stature in the golf industry.

Chris said “I have loved every minute of my 11 years at Castle Stuart and I am very proud of what we have achieved both in terms of environmental stewardship and in the golf industry. It is my belief, working alongside recognized experts Coore & Crenshaw and Mike Keiser, Coul Links will be a world class golf facility with an exemplary environmental and land management plan.”

The developers have held four public consultation events, two each in Dornoch and Embo. Approximately 100 local citizens attended each of these events and over 70% of respondees expressed support for the project. In an effort to share the latest revisions of the layout and to communicate further details of our economic and environmental plans, the developers will hold two more public consultation events, on Sunday evening October 22nd (Embo) and Monday evening 23rd (Dornoch). Once submitted, all interested parties can review the planning application at http://wam.highland.gov.uk/wam/. Everyone is encouraged to forward sentiments and comments on the project directly to Highland Council at that address.

Broad Public Support Established Across the Highland and Scotland

In addition to the four public consultation events, the developers have met and discussed the project with numerous agencies, statutory bodies and constituencies across Scotland over the last two years. The following organizations and bodies have agreed to lend their unequivocal support to the project through the planning process:

Member of Scottish Parliament for Caithness, Sutherland and Ross, Gail Ross – “I have met with the developers and reviewed their plans extensively. I have also discussed the project with many people across my constituency, especially those in the local area and listened to their views. I feel that the concerns that have been raised by individuals and organizations have been addressed and therefore  I give my support to the project. It has the potential to be one of the most exciting opportunities for my constituency both economically and environmentally.”

Member of Parliament for Caithness, Sutherland and Easter Ross, Jamie Stone – “I have met and reviewed the project with various parties. It looks to me that the developers are well on the way to ironing out any perceived environmental glitches. All being well this could be a major boost to the local economy.”

Dornoch Community Council Chairperson Yvonne Ross – “We have met the developers and reviewed their environmental and economic plans. Based on the information available at this time, we support the project and believe it is a critical next step in the success of the Dornoch, Embo and East Coast of Sutherland communities.”

Dornoch Area Community Interest Company Chairperson Joan Bishop– “The DACIC board unanimously, fully and enthusiastically support the Coul Links project. We believe the environmental issues can be constructively addressed and the project will materially strengthen the economies of the Dornoch, Embo and other East Sutherland communities.”

Embo Community Trust Chairman Jim McGillivray – “The Embo community simply could not be more excited about the Coul Links golf course as evidenced by our willingness as a Trust to invest in it as a partner.  Further, we cherish the site perhaps more than any others and believe it is the best option for its long-term environmental management. The Trust Directors has voted unanimously to support the project in every regard.”

Chairman of VisitScotland Lord John Thurso – “VisitScotland has reviewed the Coul Links Project and believe it is perfectly consistent with our strategic vision of the Scottish tourism sector. We lend our full support for the project.”

University of Highlands and Islands Golf Management Programme Leader Alan Fleming  – “As leaders in the golf industry, we know and have the greatest respect for Mike Keiser and Coore & Crenshaw. We have worked closely with them to develop several potential program initiatives with Coul Links and are totally supportive of the project. It will be a tremendous global boost to our program.”

All 6 Area Golf Courses (Royal Dornoch, Brora, Golspie, Tain, Skibo and Castle Stuart) – Neil Hampton, General Manager of Royal Dornoch Golf Club, said “We have met with the developers and Mr. Keiser and Coore & Crenshaw have the finest reputations in the global golf industry. Together with all the local clubs, we believe this project has great potential to expand the Highlands as a major golfing destination in Scotland and perhaps the world, hence we wholeheartedly support the project”.

Please email info@coullinks.com  with any enquiries relating to the project.