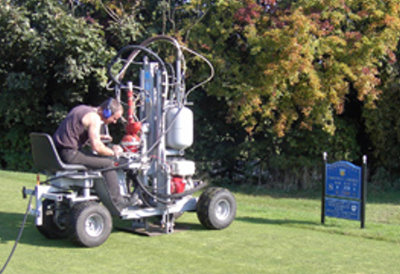 It is not often that the Terralift® machines venture much further north than Perth, but they are scheduled to venture up into deepest Scotland during  late March/April.

Flood waters can create compaction panning due to the weight of the water laying on the surface before it dissipates.  Fracturing and fissuring the soil using the Terralift® machine will certainly help get the soil back into life by injecting oxygen back into the root zones relieving compaction panning and waterlogging.

The process using the Terralift® machine is to hammer a hollow probe into the ground to one metre depth, (far deeper than other aeration machines) before letting loose a blast of compressed air into the soil providing the necessary air to the root zone.  To keep the fractures and fissures open longer, dried milled seaweed is incorporated on the tail end of the air blast.  This product sticks to the walls of the fractures and fissures, expanding and contracting with the moisture conditions within the soil structure, to help keep the fractures open longer.

The probe hole is backfilled with an aggregate to aid in the aeration process.  This process is carried out using two-metre centre spacings on a staggered grid pattern.  When treating around tree roots, the usual procedure is to aerate one metre inside and one metre outside the canopy dripline, as this is where the growing roots lay. Benefits are a healthier, rejuvenated soil structure with air accessing the root system.  An increased stronger root growth will provide a healthier sward as well as a better developed canopy growth.

In terms of the trees around the golf course, these are often strategically placed  to make for an ‘interesting play’.  Deep aeration treatment using the Terralift® machine around tree roots is usually a one-off treatment, unless the tree is showing signs of severe stress when a second treatment may be required.  It is an unusual “one-off” type  of aeration treatment which turf and tree roots have benefitted from since the mid 1980’s when the Terralift machine first arrived in the UK and shown on BBC’s Tomorrow’s World treating the Major Oak in Sherwood Forest.