The new Regnum Golf and Country Club Bodrum, the first full-length golf course in the well-established resort area, had its official opening during the busy summer season. A large number of Turkish dignitaries were present at the opening, including Minister of Foreign Affairs Mevlüt Çavuşoğlu, Minister of Culture and Tourism Mehmet Ersoy, and Mayor of Bodrum Mehmet Kocadon. 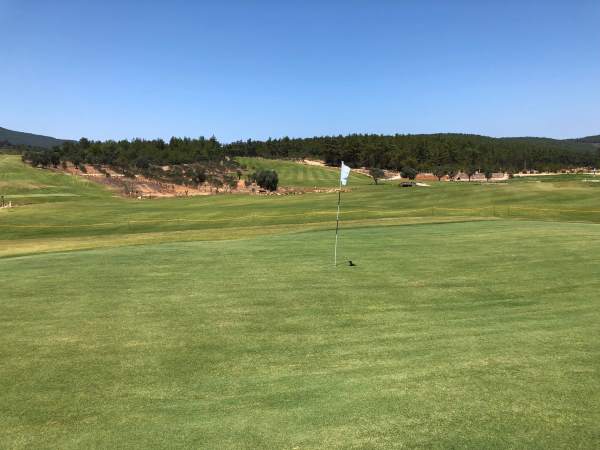 The course represents a second collaboration between developer Fikret Ozturk (who also owns the nine hole Bodrum Golf and Tennis Club, the only other operational golf facility in the area) and golf course architect Tim Lobb; the pairing’s first project, the Carya club in Belek is widely regarded as Turkey’s best course. It is also the fourth course built for Lobb by contractors Naki Evandr and Cengizhan Bӧlükbaşi of GolfTek. Up to 275 villas will be built on the property over several years.

The par 71 course measures 6,016 metres from the back and 4,770 metres from the front of its four sets of tees. It occupies a former olive grove, and indeed the olive oil from the property is being marketed as a house product by Regnum.

“The property is rather hilly, and also, at 1450 acres, rather spread out, with lots of long views of forests, valleys and hills,” said architect Lobb. “Because of the rocky conditions, we did a bare minimum of drawing in advance, and worked the design out in the field in close partnership with Naki and Cengizhan. It was really the first time I have ever worked that way; it demands total trust between architect, client and contractor – as such I am grateful to have been working with such a strong project team that all knew each other very well.”

Developer Fikret Ozturk said: “Bodrum is a wonderful destination, with hills and mountains as well as the sea and the beaches, but the degree of development in recent years means that it can be a little frantic. Our goal for this estate is to give a feel for what the peninsula used to be like – calm, quiet and deeply natural. As such, it was important that we built a golf course that sits lightly on its environment, and I am pleased that Tim and the construction team have done such a great job.”

Yas Acres Golf & Country Club in Abu Dhabi has just taken delivery of 45 new Club Car golf carts fitted with Connect GPS that will offer accurate yardage to the pin as well as a host of other features.

For over 35 years Howard Wiseman and his team of highly skilled craftsmen have been making hand-made luxury cases from his workshop in London, using state-of-the-art materials, including carbon fibre.

Officials from aboutGOLF and the PGA of America have announced the completion of a custom-built, multi-simulator wall at the new PGA of America headquarters in Frisco, Texas.