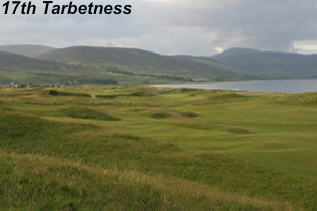 Brora Golf Club has come up with a novel way of raising funds: they are auctioning the naming rights for each of the course’s 43 bunkers. The proceeds of this auction will be invested in equipment for the further development of the golf course

This initiative was conceived and is sponsored by two club members, Mike Mackintosh and Ian Butcher. Ian Butcher is known in the golf business as International Golf Development Officer at Elmwood College.

Brora Golf Club has a traditional links course, designed by James Braid, where little has changed since he left in 1923. Peter Thomson, CBE – Five Times Open Champion and President of the James Braid Society – said, “Brora on the Moray Firth is one of my favourite links is, where the golfers share a precious piece of territory with a hundred or so woolly sheep. What could epitomise nature better than such a communion? I pray it will continue and last as long as the world.”

The first auction for naming rights to approximate half the bunkers is now on and will close at midnight on Wednesday 22 December. Details of the bunkers to be auctioned are listed on the website at www.broragolf.co.uk

Bids will be accepted by email to secretary@broragolf.co.uk, by letter to the Secretary, Brora Golf Club, Golf Road, Brora, KW9 6QS or by telephone on +44 (0)1408 621417. Telephone bids will need to be confirmed in writing by email or mail. The minimum bid for any bunker is £50.

The Club is keeping an up to date list of the highest bids made for bunkers which can be viewed at http://www.broragolf.co.uk/BunkerAuction/BunkerNamingAuction.aspx

Join in the fun and see if you can get the once in a lifetime opportunity to name a bunker at Brora. You may have just found the perfect Christmas present for the person who has everything!

The naming rights for the remaining bunkers will be auctioned in summer 2011.