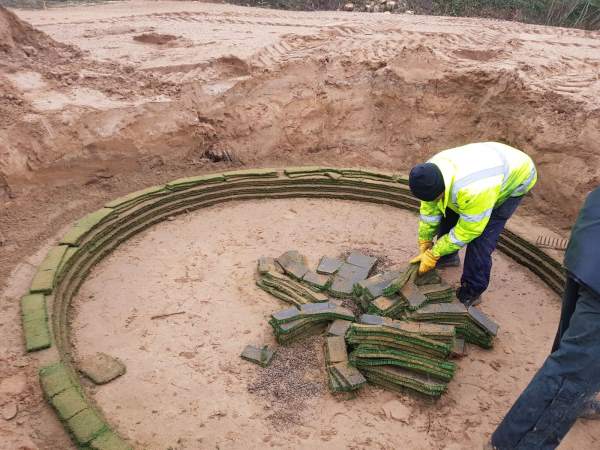 Tain Golf Club, in Ross-shire in the far north of Scotland, was the venue of a unique ʻbunker campʼ recently, as representatives of several local clubs came to see the building of a bunker on a new practice facility for the club.

Huw Morgan MG and Llewelyn Matthews, respectively technical manager and construction manager with synthetic revet specialist Ecobunker, went to Tain at the invitation of course manager Iain MacLeod to install the companyʼs product in a new practice bunker, and MacLeod took the opportunity of inviting representative of other local clubs to attend and view the process. Attendees included Chris Haspell, representing the planned Coul Links at Embo, Eoin Riddell of Royal Dornoch, Caroline Munro of Bonar Bridge—Ardgay and Gary Urquhart of Invergordon.

“When Iain asked us to come up and install our produce on his new practice facility, we jointly figured it would make sense to ask some of the other clubs in the area to come and see how it works,” said Morgan. “In northern Scotland there are a bunch of courses that are really good, natural golf, but which donʼt have a lot of money, and our product can save significant amounts of cash over using natural revet, because it doesnʼt need to be rebuilt every few years.

MacLeodʼs team will install a second Ecobunker on the practice facility in the near future, and club greens chairman Gus Gurney said it may not stop there. “We were very impressed with the Ecobunker product and process, and would be very interested in exploring its potential for future use to instal it in the bunkers out on our links course,” he said.