A North Wales golf club has won a national award for changing part of the course from a hole for birdies into a haven for the birds, bugs, bees and other wildlife.

Abergele’s golf course manager Darren Anderson, along with his team and club members, used available materials to transform a disused hole into a mini wildlife area.

Their efforts were rewarded with the Outstanding Environmental Project of the Year at the STRI (Sports Turf Research Institute) Golf Environment Awards ceremony in Harrogate.

While Open Championship venue Carnoustie was the Environmental Golf Club of the Year, Anderson and his team at Abergele were delighted to get recognition for their project which has had a substantial impact over the last couple of years. 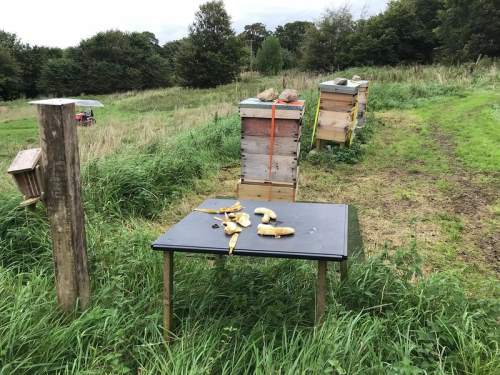 “There was an old golf hole that was no longer used after changes to the course 30 years ago and we re-configured it to encourage nature,” explained 42-year-old Anderson, who followed his father and grandfather into green keeping. We have called it Tir Gwyllt, which is Welsh for Wild Land. There are now bee hives on the back boxes, a house for dormice, corrugated sheds for reptiles as we decided to make something of it rather than just let it grow.

“It had become overgrown with rye grass, when we took that out we started to see orchids coming through. We started with a log pile for beetles and then we started to get our teeth into it. We did not have money to invest in that area so we used what we had on site which meant we had to be innovative. We used wood from trees cut down or trimmed on the course and made a sort of Bug Hotel for the bugs, ladybirds and mice. We put something on the notice board to explain to the members and one was a bee keeper so we now have four hives in that area.”

Part of the prize for Anderson is five days in Portugal to look at the environmental approach there.

Anderson, who is the only master greenkeeper in Wales, is completing a Masters degree in sustainable golf course management at the University of Lancashire in Preston. His grandfather was the greenkeeper at Nairn and Stonehaven, his father moved to Abergele before returning to Aberdeen and Murcar Links.

STRI ecology consultant, Sophie Vukelic said, “A huge congratulations to the winners and finalists of this year’s awards, you each showcase what sustainable management is within golf. The golf environment is a better place with you all working to protect it.”