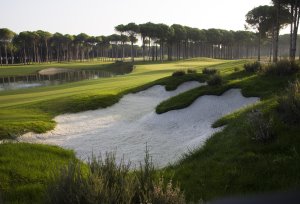 As the highest scoring winner in its category (5*), the course, designed by the golf course architecture practice founded by five-times Open champion Peter Thomson, will now compete against other winning companies from Asia Pacific, the UK, Americas and the Middle East to find the ultimate ‘World’s Best’ in each category. These results will be announced at a grand gala dinner at the Royal Lancaster Hotel, Hyde Park, London on Saturday, 27 November.

Tim Lobb, TPL principal, said: “When we first visited the site about five years ago, we immediately appreciated Carya’s vision to create an outstanding golf course and a unique golfing experience – and we were honoured to be selected to conceptualise it. Winning such an accolade as Europe’s Best Golf Course 2010 ahead of the other contenders and being nominated for the International Property Awards 2010 that will take place later this year, is definitely satisfying and a testament to the hard work the entire project team has put into building the Carya Golf Club.”

This comes hot on the heels of the course in Belek, Antalya, hosting Turkey’s first European Challenge Tour event for 11 years that saw England’s Charlie Ford walk away with the top prize.

Carya Golf Club, inspired by the classic heathland courses in the UK, was designed to be enjoyed by all golfers. The free flowing holes run between pine and eucalyptus trees and across a dramatic sand ridge. From the Championship tees, the 7,186 yard (6,570 metres), par 72 course, is a demanding test of golfing strategy – while tourists playing from the Regular tees (6,366 yards / 5,821 metres) will appreciate the generous fairways and enjoyable approaches.