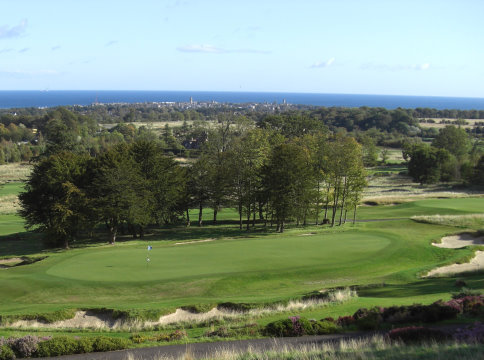 The Duke’s St Andrews is a championship golf course with a spectacular setting above St Andrews. It has magnificent panoramic views over the surrounding countryside to the sea and is highly regarded as one of the finest heathland championship courses in theBritish Isles.

The course is built on a clay soil making drainage a problem; however it is generally disease free. Although normally windy and cool, the last 2 winters have been particularly bad with the course being closed for some of the time.

Course Manager Derek Robson and his team of 8 fulltime greenkeepers (additional 7 in the height of the playing season) strive to keep the club open all year. They top dress throughout the winter combining this with slitting and verti-draining and applying sand to the fairways.

Last year Derek decided on a new strategy; he takes up the story: “We used to use a High K product to see the grass plant though the winter but Greentech suggested I try Headland’s Multigreen Mini 12-0-44. The idea behind the product is quite logical really,” he went on to explain, “the fertiliser is respondent to temperature so it doesn’t matter when you apply it as it stays dormant, around the plant roots, until the temperature rises and then it springs into action and feeds the plant.”

Application is made once soil temperatures have dropped below 10°C to prevent any encouragement of disease. The dense prills fall to the base of the sward and incorporate into the soil surface.  After application, 40% of both the nitrogen and potassium is immediately available to promote a strong, hard sward. Thereafter, the product releases the remaining nitrogen and potassium over 5-6 months, stopping below 6°C during the cold winter period.

In this dormant state, nitrogen and potassium are protected from leaching by the polymer-resin coating.  As the soil temperature rises, nutrient release begins again getting the greens off to a head start without the need to re-apply fertiliser.

Derek again: “In the spring not only was the grass sward so much thicker, but also the moss control was brilliant, and the cost was not as expensive as one would think”.