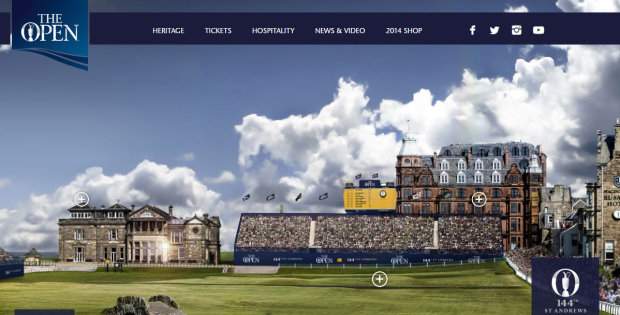 Launched yesterday in St Andrews, The Open’s new brand identity is a consolidation of The Open’s rich heritage and values and delivers a new look for Golf’s oldest championship.

Designed to capture all the defining attributes of The Open and to communicate the Championship’s unique heritage to golf fans the world over, the new brand identity was delivered by two London agencies, teamup and Designwerk, who have created brand identities for some of the world’s leading sporting properties.

A short film celebrating the unique story of The Open has been released to coincide with the launch. The film entitled, The One, The Open, can be viewed at http://bit.ly/theonetheopen and through The Open’s social media channels Facebook, Twitter, YouTube and Google+ and by visiting the new look official website of the Championship, www.TheOpen.com

The Open’s success and global appeal emanates from its relationship with golf fans all over the world and several thousand golf fans and sports industry experts were consulted as part of the process, their input helping shape the new brand identity for golf’s most international Major Championship.

The enduring symbol of The Open, the Claret Jug, forms the centrepiece of the new logo, locked within the “O” of Open. The logo is the foundation of the new branding and will be presented alongside distinctive graphic elements, reflecting the unique landscape of links golf, and evocative photography.

Peter Dawson, Chief Executive of The R&A, said, “We know that fans of The Open share a tremendously strong connection with the Championship.  The new branding celebrates the values long associated with The Open, the inspiration provided by great champions, the authentic and unrelenting challenge of links golf and the openness of our unique championship.

“The Open has enjoyed great success for more than 150 years and strengthening its brand will help to ensure its appeal continues to grow over the decades ahead.  We believe the new branding will reflect an enhanced experience for the millions of golf fans who support The Open.”

Fred Popp, Chief Executive of teamup, said, “The Open has tremendous brand equity and is one of the world’s most cherished sporting events. Through its steadfast commitment to identifying the Champion Golfer of the Year, The Open is a celebration of golf in its purest form.

“As The Open’s lead brand agency, our work included the development of the brand story, definition of the brand expression and the resulting logo that delivers on the Championship’s rich history and heritage, fit for audiences in the digital age.  teamup is thrilled to have played a part in helping The Open further strengthen its ambition and unshakable commitment to the sport and fans of golf everywhere.”

The new brand will come to life when The Open returns to St Andrews, the Home of Golf, next July for the 144th playing of The Open.