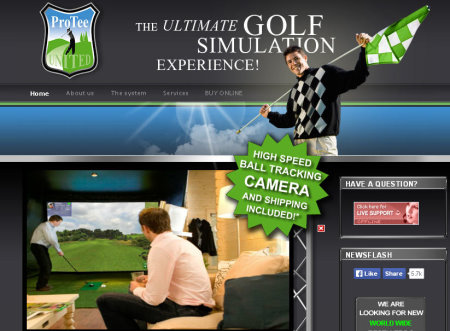 Canadian video game developer, HB Studios, has announced a global partnership with golf simulator specialist ProTee United. The simulator version of the The Golf Club will allow golf enthusiasts worldwide to play the game all year round with their own golf clubs and a real golf ball in the comfort of their own homes. Golf simulator users will also benefit from the thousands of courses created by TGC players on PC and console. Apart from enjoying the amazing graphics on a big screen players will be able to create their own course, play online with friends, and play in online tournaments worldwide.

”We are so excited about the greatness of the game and the SDK which will allow golf simulator users worldwide to immerse themselves further than ever before into one of the most technically advanced golf games ever created,” said Dennis van Drie of ProTee United. “Not only will we enable ProTee users to play TGC on ProTee simulators, we will also release an SDK for other golf simulator manufacturers to play TGC with real clubs and balls in online play and tournaments.”

HB Studios CEO Jeremy Wellard adds, “It’s great to have the game reaching out to a wider audience and allowing people to play the game just like the real thing, with the leading simulator company in the world we’re confident that it’ll take golf to a whole new level.”

The Golf Club is due for worldwide release on Sony PlayStation 4, Microsoft Xbox One and PC Windows platforms in late August.

For Steam Early Access visit the store on Steam at: http://store.steampowered.com/app/269730

Mizuno new ST Series of metal woods, which go on sale in February, represent the culmination of a three-year driver development project.

Adidas’s new ZG21 spiked golf shoe, which goes on sale in the UK & Europe on February 19, was nearly two years in the making, with the company experimenting with numerous prototypes, configurations and technologies before settling on the final product.

The Wyndham Grand Algarve in Portugal is to relaunch this Spring following a €5 million renovation project.