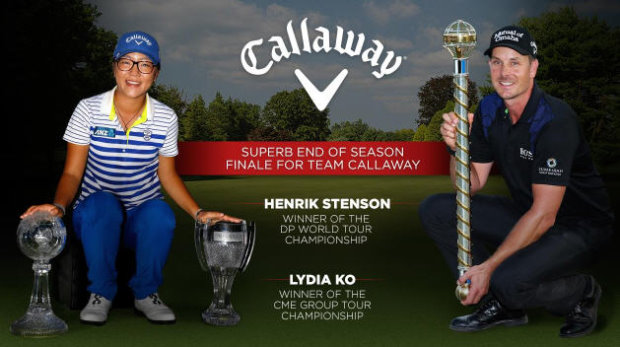 Callaway Staff Professionals, Lydia Ko and Henrik Stenson, have finished the season in style, notching up victories on both the LPGA and European Tours, respectively.

For 17-year-old Ko, the win also secured the top spot in the Race to the CME Globe – paying out $1.5 million – the biggest payday in women’s golf history.

Meanwhile Stenson, the ‘Ice Man’, successfully became the first player to defend the DP World Tour Championship, earning him second place in The 2014 Race to Dubai, and a move to number two in the Official World Golf Rankings.

The 38-year-old from Sweden was in superb form all week being second in both driving distance, and driving accuracy, averaging 309.9 yards off the tee, and hitting 82.1% of fairways on the 7,675-yard long Earth Course at Jumeirah Golf Estates, Dubai, yielding scores of 68, 66, 68 and 70 to win by two strokes.

The New Zealander’s third win of the season, at the CME Group Tour Championship at Tiburon Golf Club, Naples, FL, came after 76 holes, when the 72-hole lead was shared three ways on ten-under-par. Ko has also become the youngest LPGA golfer to secure the Rolex Rookie of the Year title and to make $2 million in career earnings.

Neil Howie, President and Managing Director of Callaway EMEA, said: “These two wins cap off what has been a superb year for Callaway and Odyssey and is further testament to the product range which has grown significantly in market share as well as appearing in winner’s bags around the world.”