PowaKaddy FW7 Voted No.1 Trolley On The Market 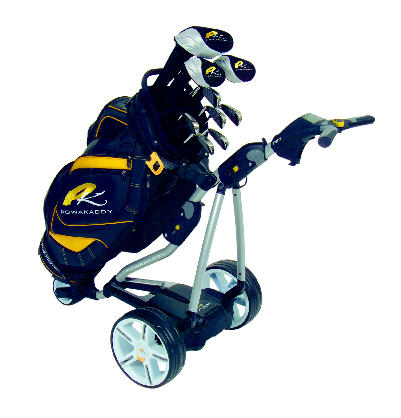 The high-performance and feature-packed FW7 trolley from golf’s No.1 electric trolley brand PowaKaddy has been voted the best model on the market by the UK’s top-selling Today’s Golfer magazine.

Based on an extensive testing process that put 11 of the most popular electric trolleys through their paces over a number of rounds, the flagship FW7 came out on top to take the Gold Award, edging out Motocaddy and Stewart Golf in the Silver and Bronze places respectively. The test – which took into account weight, folded size, ease of storing, electronic features, aesthetics and accompanying batteries – was revealed in the December issue of Today’s Golfer, on sale from today (1st October).

“The FW7 is a serious piece of kit – it has the bells and whistles that lots of modern golfers crave,” was the verdict of Simon Daddow, Equipment Editor of Today’s Golfer. “It is really well constructed and it performed superbly.

“There are tons of gadgets to show you everything from how long your round takes to how far you’ve hit it and what the time is,” commented Daddow in the test write-up. “Doing the simple things well means more to me, so I like how the battery stays in situ even when the body is folded and locked down. It also easily fits into the boot of my Ford Focus with both wheels attached.”

Meanwhile, PowaKaddy UK Sales Manager David Howse said: “We’re delighted to win this award and would like to thank both Today’s Golfer and all our trade accounts that’ve helped promote the new Freeway range superbly this year. It’s also recognition of the further improvements that have been made to all our Freeway trolleys in 2015 and the corresponding growth the brand has enjoyed in recent years.”

As with the FW3 and FW5 trolleys that make up the popular PowaKaddy Freeway range, the FW7 has been enhanced for 2015 with new, larger 11” wheels with low-profile tyres and a completely redesigned front wheel to enhance the stylish and sporty look. The lightweight-yet-strong PowaFrame®, which is a key piece of technology in allowing each Freeway to fold into a car boot-friendly size, has also been reshaped in order to allow the handle to be raised by an inch, enhancing use for taller golfers.

The FW7 incorporates a plethora of performance-related features that were explored in detail by the Today’s Golfer team, including a full colour LCD Widescreen display with On/Off indicator complete with Power, Pause & Resume function, as well as Digital Power Gauge and Battery Fuel Indicator. The brand’s top-end model also includes other well-used features such as an integrated USB point for charging mobile phones and GPS devices, an Automatic Distance Function to set the trolley off at distances between 5-50 yards and specific speed display and distance measurement functions unique to the FW7.

Thanks to a well-received launch of the 2015 Freeway range, PowaKaddy recently announced an impressive 54% increase in trolley unit sales across the UK and Ireland (June 2014 – June 2015). A surge in product sales has been helped by the Kent-based brand adding another assembly line to its Sittingbourne factory in March this year, which crucially allowed the company to increase production capacity by 50%.