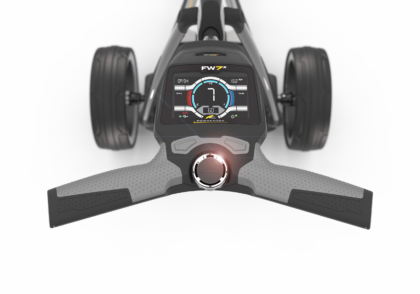 Ahead of the highly-anticipated launch of its 2017 product range, No.1 electric brand PowaKaddy has announced its most successful year ever with TGI Golf Partnership, boasting a 27% increase in sales value generated during 2016.

Bolstered by an immensely popular launch of its 2016 Freeway range – which also became the first trolley family to reach half a million sales – the pioneering brand also recorded an impressive growth of 66% in sales of electric trolleys with Lithium batteries and 34% in the value of single Lithium batteries sold.

The incredible performance of the FW3, FW5 and FW7s was recognised by TGI in its annual awards ceremony, with the Freeway range making it into the final three nominees for the Product of the Year accolade, alongside PING and TaylorMade.

Supporting the popular trio of Freeway trolleys in 2016 was the introduction of PowaKaddy’s super-intelligent TOUCH® model, which was met with a strong seal of approval from retailers, consumers and media alike.

“We’d like to thank TGI and every single one of their partners for their incredible support, which continues to help PowaKaddy sales grow year-on-year,” said the brand’s CEO, David Catford. “We’re particularly proud of the performance of the Freeway range during the last 12 months. However, we’re by no means resting on our laurels. So we have recently introduced a full-five year warranty on Lithium batteries to help our retail partners convert even more golfers into Lithium in 2017.

“Importantly, the success during the last year has been backed up by a fantastic response to the new 2017 range,” added Catford. “Our pre-orders are up by more than 40% across the board, with strong interest in our enhanced Freeway range, as well as brand new compact and GPS models set for later this year. We’re really excited about what the new season will bring and look forward to working with our stockists on what will be our most revolutionary product line of all time.”

Leading PowaKaddy’s new line-up for this year will be a stunning new Freeway stable, which will offer golfers several new design and performance features without any price point increase. Meanwhile, a simple-to-fold compact electric trolley and the world’s first electric trolley with integrated GPS are set to launch in the coming months. Our retailers are urged to contact their Area Sales Manager for more information.

Eddie Reid, TGI Golf Managing Director, said: “We have enjoyed another stellar year with PowaKaddy. The FW range is the best in the marketplace, not only in terms of performance, but also in margin, customer service and support is first class.

“We were delighted to see PowaKaddy nominated once again in the Product of the Year category at the recent TGI Golf Awards, and we look forward to continuing to grow with them.”