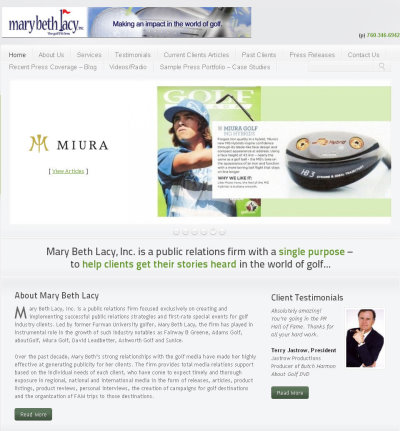 For the past 20-plus years, Lacy has had plenty of experience promoting the golf club industry – having represented a variety of high-profile club brands. Her expertise will help maximize PowerBilt’s media coverage and consumer awareness, with the goal of building the longtime brand into an even more prominent name in the golf club market.

“PowerBilt’s golf division has been around for nearly 100 years, but its marketing and public relations seemed to have slipped off the past few years,” says Lacy. “Its latest products are first-rate and fare very well in head-to-head testing with all of the major brands. And its equipment sales are on the rise, too. I’m excited to help take this storied franchise to the next awareness level.”

PowerBilt has been making clubs since 1916 — the same year the PGA of America was founded. The company’s clubs have been used over the years to win more than 100 PGA Tour events, including eight Majors. It’s part of the Hillerich & Bradsby family, which includes Louisville Slugger and Bionic Gloves. Bearing the company’s latest Nitrogen N7 technology, the Air Force One DFX driver is PowerBilt’s marquee product for 2014.

“Mary Beth is a seasoned veteran with an outstanding reputation in the golf industry,” says Ross Kvinge, President of PowerBilt. “She’s a perfect fit for us, and using her incredibly vast network of contacts, will hit the ground running spreading the word about our equipment. I’m very excited to have her on board.”