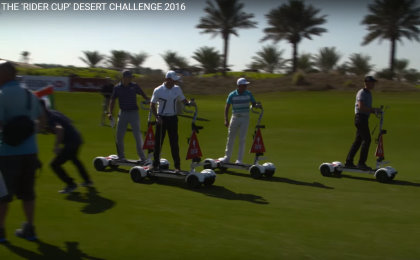 Sol Boards Inc. of Oregon, one of the industry’s hottest start-ups and makers of the GolfBoard – a surf-inspired, battery powered, single rider vehicle, that allows golfers to “Surf The Earth” – is providing a limited opportunity to make an early stage investment.

Applauded as the integral game growth catalyst by attracting much desired millennials, GolfBoard is a proven product widely considered the future of golf. Below are just a few of the accolades and milestones GolfBoard has achieved over the last few years:

GolfBoard is without a doubt considered one of the most exciting new products in golf today, and now in its 3rd season has proven sustainability. Even the world’s top golf professionals have provided unsolicited praise about how incredibly “cool” it is to ride a GolfBoard.

The true validation of a product’s potential is its ability to drive demand by end users. In this regard, GolfBoard® has energized the game of golf by attracting a whole new audience of young millennials, plus has been strongly embraced by both the x-generation and baby boomers, who find GolfBoard safe, fun, and easy to use,” says John Wildman, CEO of GolfBoard. “With proven popularity, and a unique ability to reshape and grow the game, we are now seeking capital to support the company’s high growth potential.”

“After playing a round of golf on a GolfBoard, I see its value in attracting a younger demographic by adding an element of excitement and making the game more fun between shots. When riding the GolfBoard, I was able to experience the course in a whole new way. I found myself looking for changes in terrain, it reminded me of my days as a surfer. However, the greatest advantage of GolfBoard is its ability to increase pace of play, which is a much welcome benefit for time-starved professionals like myself,” says Luan Pham, Head of Marketing, Golf Digest.

Sol Boards Inc. has installed a national sales force, and is expanding its international distribution network, led by a highly experience executive team, to capitalize on rapidly growing domestic and worldwide demand. With as many as 34,000 courses worldwide, Golfboard is well positioned for massive growth. The company also plans to leverage its innovative technology to expand in to high potential adjacent markets such as resorts, industrial, and all-terrain applications. Sol Boards Inc. expects to diversify its offering by introducing a street-ready “ResortBoard” in Q4 2016, and all-terrain “BeachBoard” in 2017.

For more information on GolfBoards’ high growth potential, and how to become a Sol Board Inc. shareholder, go to https://www.fundable.com/sol-boards-inc-dba-golfboard