John Letters of Scotland, the equipment brand with 93 years of clubmaking history, backed up its success at the 140th Open Championship with another successful week at The Senior Open Championship.

As well as looking after staff player and 44-time winner, Sam Torrance, the Letters team did not stop all week as they repaired, re-gripped and checked all the players’ equipment in addition to kitting out a lot of the field with the latest John Letters products to help them negotiate the tricky Walton Heath track.

From eventual winner Russ Cochran to Sandy Lyle, Barry Lane to Larry Mize, the Letters Tour truck was packed out each and every day of the Championship – from sunrise to sunset. As one of only two manufacturers to support the European Senior’s Tour, their efforts did not go unnoticed; particularly as the only tour support truck to stay the duration of the week and not just the practice days. 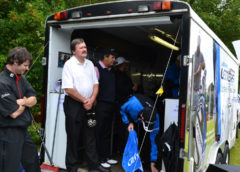 American Cochran, who shot a final round 67 to finish -12 under par and beat Mark Calcavecchia by two shots, commented: “The guys on the Letters truck have been great all week. They’ve done a great job looking after all the players.”

The players clearly benefitted from John Letters’ involvement on the practice ground, none more so than Cochran and also South African David Frost. Frost had all his clubs re-shafted and checked on Friday – before heading out and shooting 66 on Saturday, the low-round of the week.

John Letters Managing Director, John Andrew, commented: “It’s proved a fantastic week for us. As well as supporting the senior players, it also provides as invaluably product testing and feedback mechanism for our latest products and products we’re currently developing.”

“It was great to see so many John Letters products in the bags of so many players, particularly the Tour Black wedges and new Master Model irons. At this level the players demand the most exacting standards and precision with all their equipment – so if we can get it right for these guys, that lets us know we are doing things right. Our plan with John Letters is then take these products, and the same level of service and craftsmanship, to golfers of all levels and abilities” added Andrew.

Scotland’s finest clubmaker since 1918 has a history that is synonymous with The Open Championship, with former staff players Fred Daly, Gary Player and Lee Trevino all winning the Claret Jug using John Letters equipment. Having unveiled the new limited edition Master Model Tour Black irons and driver as well as re-launching of the Golden Goose and Silver Swan Putter ranges to the media the week before at Royal St George’s, the John Letters R&D and product testing team were also out in force at Walton Heath testing new prototypes of the next generation of Letters equipment.