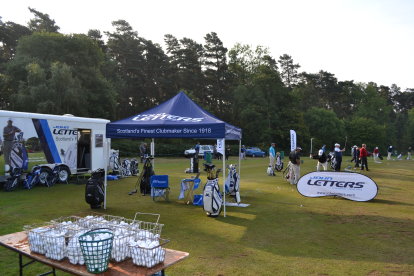 John Letters of Scotland, the equipment brand with 93 years of clubmaking history, continued their support of the European Senior Tour at the Travis Perkins Senior Masters at Woburn.

Only a matter of weeks after their success at The Senior Open at Walton Heath, the John Letters’ tour truck and tour support vehicles rolled into Woburn Golf Club to build on their relationships with the senior players and the 40 Letters products in play that week.

With a prime position on the practice ground, the Letters team of tour technicians had a Trackman radar on the range as they custom-fitted the legends of the game for the latest Letters products including the eagerly anticipated Master Model Black Driver and irons.

After hitting the Letters driver fitted with the Rip Alpha shaft, former Ryder Cup player and 23 time winner Antonio Garrido, commented: “The driver is incredible, so straight. Only five hits and it went straight in my bag.”

Meanwhile a host of legends were fitted for the stunning new Master Model irons including Juan Quiros, Angel Franco and Manuel Pineiro; with the two-time Ryder Cup player Pineiro putting the irons straight into play shooting an opening round -1 under par 71 and hitting his 7 iron from 162 yards from the trees to within 6 inches of the pin. Andrew Oldcorn also put the T9+ hybrid into play alongside Angel Franco and Steve Cipa.

Even with a limited field of just 73 players, John Letters boasted over 90 products in play during the three day event.