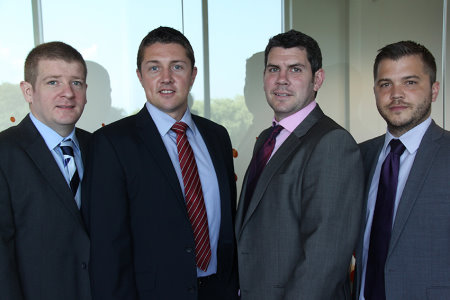 The JRW Group, the UK’s largest sport insurance specialists and owner of Golf Care and The Golfer’s Club brands, has boosted its Manchester based team with four new recruits.

Steven Lewis comes from a successful commercial background in football and golf and joins the team in the new role of Business Development Manager, with the remit to drive strategic partnerships for The JRW brands.  Before joining, Lewis was Commercial Manager for Direct Golf and was part of the team behind the launch of the brand’s very successful loyalty card. Previous to this he enjoyed commercial roles at several football clubs, notably Leeds United where he was pivotal in securing commercially successful partnerships for the club including lucrative shirt sponsorship deals.

Steven Downs, Marketing Manager, joins from Swinton Insurance where he was responsible for their in-house social media team. Previous to this he spent five years at The Co-Operative Group as Marketing Manager working on the company’s ‘Membership’ scheme. Here he was responsible for the Membership Magazine which went out to 8 million members. Downs began his career at Carole Nash, the specialist motorbike insurer. He brings a wealth of experience in the insurance industry to his new role overseeing the marketing strategy for all The JRW Brands including Golf Care, The Golfers Club, insure4sport, cycleplan and now Fishing Care.

Richard Lilley joins the in-house studio as UX-UI Developer with the objective of creating more user friendly websites and interfaces across the portfolio of brands. Previously, Lilley was at Cheadle-based Character World where as Creative Developer he led a team working on prestigious brands including Disney, Sega and HIT Entertainment.

And the final new staff member is David Lavelle who joins as a Senior Developer from MDSAS.  Lavelle has a passion for software development and will work across all The JRW Group brand websites, their databases and CRM activity.

John Woosey, Managing Director for The JRW Group, said, “The new appointments are great news for The JRW Group as we take the business forward and continue to grow our golfing brands. We’re all clear as a team on where we want to be, we’re an ambitious company and already the new members are making steps to achieve these goals.”