Justin Rose of Great Britain won golf’s first Olympic gold medal in 112 years, watched by a global TV audience estimated at more than 3.6 billion. The course was exclusively prepared with Jacobsen equipment with more than 40 machines used during the grow-in and build-up period, supplemented by a fleet of tournament support machines and Jacobsen technicians for the event. 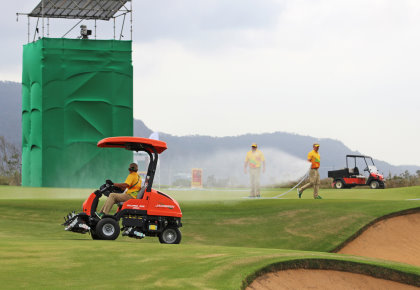 Englishman Neil Cleverly was appointed course superintendent early in the project, as the earth moving and shaping began. After seeding and turfing got underway in May 2014 Jacobsen signed a preferred supplier agreement with the owners of the course; Neil has been on-site almost every day galvanising and training the team to produce a superb championship facility.

Commenting on his Jacobsen fleet, he said, “The Jacobsen equipment is extremely versatile and is doing a great job on the course. The Eclipse 322 can be manipulated to be used as either a triplex or as a single mowing unit, and the TR-3 is a universal tool; it’s a semi-heavy duty machine that does a huge amount of work and produces a fantastic cut, even on steep banks.

“We needed a company to meet the requirements of both the golf course and the associated bodies, such as PGA, the Olympic Committee, IGF and deliver on a project that is being seen worldwide, where golf pros will compete for the bronze, silver and gold medals for the first time in over 100 years.”

David Withers, President of Jacobsen said, “Congratulations to Justin Rose on his historic win; it’s a fantastic achievement. However, the unsung hero of this event is course superintendent Neil Cleverly, together with his team, who have worked tirelessly over the past three years to prepare such superb conditions for the competitors.

“One of the deciding factors in winning the business was having a local distributor in Brazil. ProGolf has represented the Jacobsen brand since 2012 as well as Ryan, Turfco and Smithco; three companies with whom we have excellent working relationships across the globe.

“It’s obviously a tremendous accolade to be associated with the Rio golf course and, once again, we’re delighted to be involved with the world’s most prestigious sporting event, as we have been for many decades. This was a particularly important win for us, as it marked the return of golf after more than a century.

“Finally, best wishes to all of the women competitors, whose event begins tomorrow (Wednesday). I’m sure the course will be equally pristine, when they compete for their medals.” 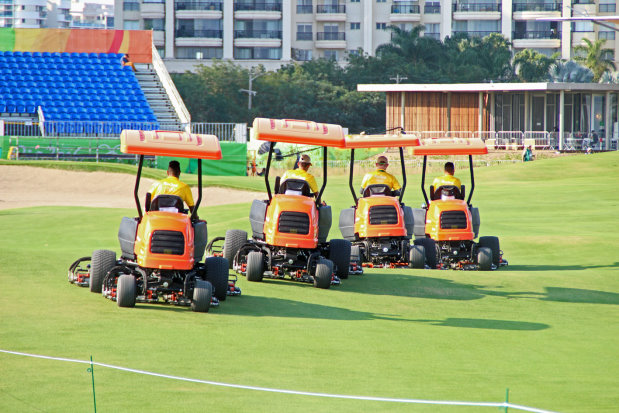