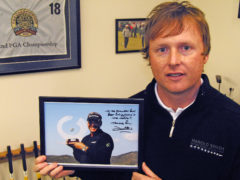 Portrush’s most famous resident told his friend and manager Cthat he was off to play Royal St George’s Golf Course in Sandwich – two weeks before The Open!

So says Darren Clarke’s putting coach Phil Kenyon, director of instruction at the Harold Swash Putting School (HSPSE). “He told Chubby he wanted to prepare properly.  So he went down there for the day on the Monday before the French Open. People may not have seen that, or appreciated that Darren has been really working hard all year to get back to the top of the game. The Open was one of those events he was determined to do well at.”

This new dedication peaked with a win in Mallorca back in May, but it was a win that brought about greater expectation for the remainder of the season. A poor run of form through June, meanwhile, led to Clarke suspecting after the final round of the Scottish Open at Castle Stuart that he was trying too hard.

“You could see from his composure throughout the weekend that he was back in control, more relaxed and trusting himself again.”

One of the factors of Darren’s improved results this year has been some improved performances on the greens, which has stemmed from the work he has done with Kenyon technically on his set-up and balance. Together they have worked to keep the mechanics of his putting simpler in an effort to be more consistent from week to week. Kenyon also revealed not only did Darren need to train his putting stroke but he needed to start trusting it more.

“‘I think that’s what we saw last week,” explains Kenyon. “A blend of better mechanics and somebody trusting his instincts.”

HSPSE is known throughout the world as being the first putting coaching system to have a core teaching programme that reinforces exactly the same principles for Tour pros and club golfers anywhere in the world it is deployed.

This consistency means that the ability of a golfer to trust the technique he or she has developed in a similar way to people who play to The Open standard.

Kenyon also coaches Tomas Bjorn, who led in the first round after shooting 65 and finished 4th. Other players who made the cut and are regular visitors to Kenyon’s studio at Formby Hall, Southport include were Joost Luiten, Simon Khan, Henrik Stenson and Ed Molinari.