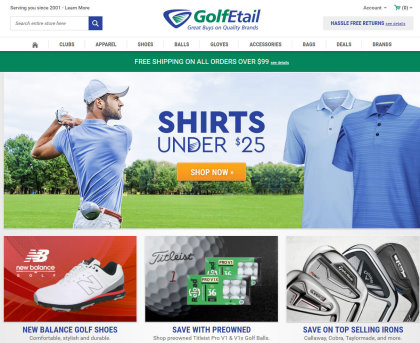 BigCommerce has announced leading sports and outdoor retailers Dazadi, Exxel Outdoors, GolfEtail and Marucci Sports have selected and successfully migrated their online stores to BigCommerce Enterprise. The platform migrations and subsequent launches were completed in the first half of 2016 in an average of just six weeks.

Outdoor and sporting goods equipment, a $63 billion market in the U.S.1, remains one of the fastest-growing online retail segments, with 56% of U.S. consumers stating they have made at least one online purchase in the category during a three-month period, according to research from consulting firm A.T. Kearney.2 During 2014, the most recent year for which data is available, more than $8.87 billion worth of sporting goods and equipment was sold online in the U.S. alone — up nearly 40% from 2012 — according to data from the U.S. Census Bureau.

Leading golf equipment retailer GolfEtail migrated to BigCommerce Enterprise for its enterprise-level integrations and high-level of security and uptime. In the week after launching on the BigCommerce platform, GolfEtail saw a 12.4% increase in transactions and 8.9% increase in revenue as compared to its previous platform. “We looked at other ecommerce platforms that claimed to offer similar enterprise-level flexibility and features, but BigCommerce far exceeded the competition by offering the highest level of stability, particularly through its robust integrations and API,” said Marc Ducey, president of GolfEtail. “With BigCommerce, we don’t need an IT team to maintain our online store and we have access to the enterprise-level functionality and support we need, which allows us to focus on what we do best.”

“Online retail has become a huge growth driver for our merchants across the entire sporting goods industry,” said Russell Griffin, vice president of mid-market sales and channel for BigCommerce. “For retailers selling in competitive categories like sporting goods and outdoor equipment, a flexible and open SaaS platform represents a competitive advantage and allows them to focus on winning market share instead of managing backend infrastructure.”